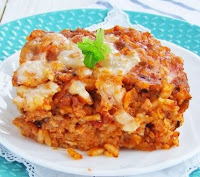 Well, here we are, the last weekend in August.
There are a few more official summer days we can enjoy this week.
Let’s make them good ones!


Covid-19 is still affecting our food supplies, giving us record-breaking high food prices.
Supply chain problems are also affecting what we can actually find on the store shelves.
It’s time for us to get back to cooking basics.

Rice, pasta, eggs and cheese can usually be found in grocery stores.
They are sometimes on sale.
They can be prepared in dozens of meals at reasonable prices.
Maybe that’s why they are in so many Comfort Food recipes.

Have a large bag of rice in your pantry?
Make a pot of ross il-forn.
Macaroni was on sale and you have cheese in your fridge?
Make a pan of macaroni and cheese.

Either recipe can be served with a salad or cooked vegetable.

About the Ross il-Forn...
it’s an easy, economical recipe, but it has to bake for 90 minutes, so plan ahead.

About the Macaroni and Cheese...
Instead of the dry mustard you could also use onion powder, Worcestershire sauce or prepared mustard.

Instead of topping with tomatoes you can use buttered breadcrumbs:
Place in a small pot
2 Tablespoons margarine or butter
Melt over medium heat.
Add
1/2 Cup fine breadcrumbs
1 teaspoon salt
1/2 teaspoon pepper
Stir to coat the crumbs.

After the bacon has cooked add
12 ounces ground beef or pork, or a mixture of the two
Stir until the meat has browned.

In a large pot place
4 quarts water
salt to taste
Bring to a boil.
Add
4 Cups elbow macaroni
Cook, stirring frequently, until the pasta is al dente.
Drain the pasta well and set aside.

WHILE THE PASTA IS COOKING:
Place in a dutch oven
1/2 Cup margarine
Melt over medium heat.
Blend in
1/2 Cup flour
2 teaspoons salt
1/2 teaspoon pepper
Stir in
4 Cups milk
Cook and stir over low heat until thickened.

PBS recently had a documentary, 'On Broadway', about the history of Broadway over the past 60 years.
Ah, Broadway… what changes you’ve seen since the 1960s!
I wouldn’t recognize the place now.

The PBS show reminded me of a story I wrote a few years ago about when Pop was my escort for our first taste of New York culture.


A few weeks ago there was an article called Daddy-Daughter Date in the newspaper.
No, they weren't going all pervy.
The Winnipeg Free Press is a family paper.
No funny business. Hey, this is Winnipeg.

The date in the article took place in Chicago.
A nice dinner and a Tony-award-winning comedy.
Shopping at the Oprah store.
No funny business. Hey, we're talking Oprah.


Daddy-Daughter Date.
What can I say?
Been there, done that.
More or less.

The pair in the article was going for a bonding experience.
When Pop and I had our date, I was a teenager living at home.
We’d had more than enough bonding.
The date wasn't our idea.
We were being ordered to go out together.

The date was Ma's idea.
No funny business. Hey, we're talking about my Ma.


One of the illusions about New Yorkers is that they fill their days going to plays, symphonies, operas and ballets.
Yeah, right.
Maybe some folks live like that.
The folks who live in Manhattan.
Not the bridge and tunnel crowd of New York.
Not folks, like us, who live in Queens.


One of the perks of colleges in New York during the 60s were the ticket offers.
We're talking plays on Broadway, opera and ballet at Lincoln Center.
Discounts, two-fers, buy two/get one free.
Anything to get butts into the seats.
If New York had had dollar stores then, they would've sold tickets there.

I was going to Pratt and had my own column in the school paper.
Shakespeare it wasn't, but I was being published every week.
I wrote about the tickets available at the student services' desk.

I picked up tickets every week, along with press releases.
They were reference material for my article.
After I wrote my piece, I just tossed them.
It was only a matter of time before I'd want to use one.

Only problem was, all the shows were in Manhattan.

Let me explain.
Ma had a terror of me going into Manhattan alone.
My choice of colleges was limited to what was on Long Island.
So I ended up at Pratt.

Pratt was in the heart of Bedford Stuyvesant, Brooklyn, a rather unpleasant area.
My first week at Pratt, the top story in the school paper was the rape, in broad daylight, of two nuns.
It had happened a couple of blocks from our campus.
We were being told to "Be Careful". Okee dokee.


I really wanted to see The Nutcracker.
It was being performed at Lincoln Centre.
Ma panicked when she heard where I wanted to go.
The only way I could go to Lincoln Centre was if my Pop took me.
Pop was outnumbered.
The poor guy was going to get some culture.

The music began.
Pop settled down in a chair and, within minutes, was sound asleep.
Or so I thought.
He was wide awake for the belly dancing bit.
Then he was asleep again.
So much for sharing great art in Manhattan.


A few years after our date, my parents visited us in Winnipeg.
Lucky for Pop, Winnipeg keeps farmer's hours.
The theatre, ballet, etc. shut down in the summer.
Paul and I decided to take them for a riverboat ride.
That's what passes for an experience in Winnipeg.

So we went to the Red River.
Pop wasn't thrilled at the idea, but he was outnumbered.  Again.
We were on the deck.
Pop settled down in a chair and, within minutes, was sound asleep.
Or so we thought.

Ma and I started talking about what to make for supper.
Ravioli... lasagna... ross il-forn?
Pop muttered, "Ross fil forn."
Then he was asleep again.

I'll always wonder if Pop did actually watch and hear The Nutcracker.

Looking for a recipe? Type its name in the space and click 'search'.

These links will also bring you grouped recipes