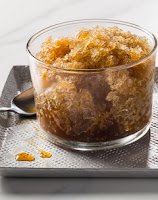 A couple of years ago, during another heat wave, I posted the recipe for Ma’s lemon granita.
It was something we grew up with, as Ma often had it in the freezer during the summer.
She always served it to us when the thermometer rose.

Our parents, I noticed, had something similar, but a bit darker in colour.
They were having rum granita, which has a bit of a kick.

Granita uses a simple syrup as a base for a cold dessert.
it’s not as fruity as a sorbet.
But you can serve it plain or with as much fresh fruit as you want.

Granitas don’t require any special equipment at all.
All you need is water, coffee, a bit of sugar, and your favourite alcoholic beverage.
Don't wan't alcohol? No problem. The lemon granita is a crowd pleaser.

If you decide to use a spiced rum you should know that they can have a spicy chocolate flavour.
Vodka also gives a kick, without the colour or chocolate taste, if you want something lighter to serve with summertime fruits.

As with the lemon granita, the measurements are a starting point.
If you want it sweeter or stronger, no problem.
Adjust the amounts of coffee and / or sugar.
It’s like making a cup of instant coffee.
You don’t exactly measure the coffee crystals or the sugar. You just suit yourself.

If, after you've first placed the container in the freezer, the slush has become as hard as a rock, don’t panic.
You can leave it at room temperature and eventually it will be soft enough to scrape.

If, when you are ready to serve it, it has frozen too hard, let the granita sit at room temperature for a few minutes. Then work the mixture with the fork.

In a small pot combine
1/3 Cup dark brown sugar, firmly packed
1 Cup cold water
Stir over medium heat to make a simple syrup.
Once the sugar has dissolved, remove the pot from heat.
Set the simple syrup aside.

Strain the cold brew through a fine sieve and discard the grounds.
Stir in
the reserved simple syrup
1/2 Cup rum, or other alcoholic beverage

Transfer to a 9 x 13 inch metal pan and cover with plastic wrap.
Place in the freezer for 45 minutes.

Remove and scrape the mixture with a metal fork or spoon, then return it to the freezer.
Repeat this step every 30 to 45 minutes for about 4 hours.
You want the mixture to resemble shards of ice.

It can be served as is, or with berries or sliced fruit.

The Moon’s closest companion in the sky is our ringed-planet Saturn - so close they fit within the same binocular field. Look to the South to spot these two only 2 degrees from each other.

July 26 - Mars comes into opposition in our sky for the first time since May 2016. At opposition, Earth as the third planet from the Sun passes between the Sun and a superior planet which in tonight’s sky is Mars. This results in Mars shining at its brightest in the skies.

July 27 - Full Moon! Longest lunar eclipse of the 21st Century! At 4:20 p.m. EDT there will be a Full Buck Moon.
This also presents the longest lunar eclipse from 2001-2100, lasting a whole 1 hour and 43 minutes. There is a catch however - if you live in North America you won’t be seeing any of this historic event as its primarily visible in the Eastern Hemisphere. Read more about it here.
The planet Mars will reach “opposition,” the moment when the Sun, Earth, and Mars form a straight line. When a planet reaches opposition, it lies exactly opposite the Sun in the sky: It rises at sunset, reaches its highest point in the sky at midnight, and sets at sunrise.

July 30 - Catch the daytime Moon this week! No matter where you are on Earth, look to the West after sunrise to see it in a clear blue sky during the day. The Moon is now in a waning gibbous phase causing it to rise after nightfall and setting westward after the Sun rises.

Just so you know… starting on July 26 there’ll be a Mercury retrograde in Leo. It will last until August 18, when Mercury goes direct.
Posted by Margaret Ullrich at 2:04:00 PM No comments: 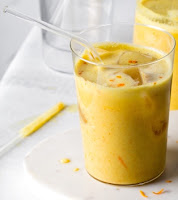 Over the years I’ve posted about Winnipeg’s love affair with the Slurpee.
One of the things Winnipeg prides itself on is being "The Slurpee Capital of Canada".
Oh, well, it’s better than being known as other types of capitals I can think of.

I know Slurpees are pure sugar.
And, yes, the resulting brain freeze headache is something this side of a kick in the head.
But we are Winnipeggers and Slurpees are given away FOR FREE on July 11th!

A few years ago, as we sat outside sucking the slush and freezing what few remaining brain cells we had, the 7-11 manager walked by and said, “It tastes better when it’s free, doesn’t it?”
Oh, yeah!!

Paul and I have enjoyed quite a few Slurpees since we moved to Winnipeg in 1975.
But, to be honest, water is becoming our preferred summer drink.

Ah… water!
It is the single most important thing your body needs to survive.
Really. You can survive longer without food than without water.
Water makes up more than half of your body weight.
It helps you digest your food, improves your skin and hair, and helps you to maintain a healthy weight.
Feeling hungry? Have a glass of water - or a cup of broth in the winter.
Way less calories than having some junk food and it's good for you.

Water helps your body do a lot of things. For example:
Water in your blood carries oxygen to all the cells of your body.
Lymph, a fluid that helps you fight off disease and infection, is mostly water.
Sweat rids your body of toxins and helps you to stay cool.

Don’t like plain water? No problem.
Try a carbonated water, such as mineral water or seltzer.

You can also add natural flavour to your water.
Add slices of cucumber to a pitcher of water, stir, and place the pitcher in your fridge for a great, low calorie, inexpensive refresher.
The cucumber makes the water smoother and adds a slightly tangy flavour.

Lemon, lime, or orange slices, both alone or in combination, can also add a punch to your glass of water.
The citrus slices also combine well with slices of cucumber.
Mix or match and stay healthy!


Golden Milk Lattes are also good for what ails you.
Turmeric, ginger and cinnamon are said to have health benefits.
As well as being tasty!

Unsweetened almond milk can be used instead of regular milk in this recipe.
You can use a 1 inch piece of peeled fresh ginger in place of the ground ginger.
If you have fresh turmeric, substitute a 2 1/2 inch piece of peeled fresh turmeric.
If you do use the slices of fresh ginger and turmeric, transfer the cooked mixture to a blender and blend until smooth.

You can also enjoy Golden Milk Latte without refrigerating before serving. After you stir in the vanilla let it sit for 10 minutes, then pour the milk into a glass and enjoy.

About those Slurpee posts - some of them had recipes. Why not check them out?

Bring to a simmer over medium heat, reduce heat to low and, stirring occasionally, cook for 15 minutes.
Remove from heat and stir in
1 teaspoon vanilla extract
Let cool to room temperature.
Place in the refrigerator and allow to cool completely.

Fill 4 tall glasses with ice.
Stir and divide chilled latte between the glasses.
Garnish with ground cinnamon and serve.

The term Dog Days of Summer means the 20 days before and 20 days after the alignment of Sirius with the Sun (from July 3 to Aug. 11).

Yesterday Jupiter became stationary in the night sky and resumed its eastward course, meaning Jupiter will no longer be in retrograde (westward motion).
If you’re in the Northern Hemisphere you can see the planet high in the southwest sky as soon as darkness falls.

July 13 - The Friday the 13th supermoon solar eclipse will be the first of its kind since Friday the 13th on December 13, 1974. The partial solar eclipse begins after dark at 9:48 p.m. EDT, and unfortunately will only be visible to penguins, as the viewing area will fall in open waters between Australia and Antarctica.

July 14 - Catch the waning crescent Moon pair up with Mercury after sundown. You may need binoculars to spot them, especially if you live in the mid-northern latitudes like the U.S., Canada, and Europe.


July 15 - Following its proximity to Mercury, the waning crescent Moon with move on to Venus. With the unaided eye or binoculars, you may be able to spot the soft glow of earthshine (twice-reflected sunlight) on the nighttime side of the Moon.
Posted by Margaret Ullrich at 5:53:00 PM No comments: