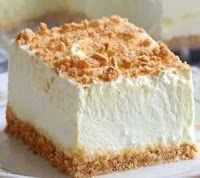 Thanks to the COVID-19 virus we’ve been staying home for the past four months.
Be it ever so humble, there's no place like home.
Staying home is always better than having to stay in a hospital.
For one thing, the food is always better.

Ah… the food.
Since the virus started there's been a growing interest in home baking, especially in baking bread, particularly sourdough.

The only problem is, since we’ve been staying home eating all that bread and not going out for walks or errands unless absolutely necessary, the calories have been staying on our hips, as well as on other places.

It’s time to get back to normal and to start getting back into shape.
But we’re still in a stressful time, and occasionally need a bit of comfort food,

The Woolworth Icebox Cheesecake is a delicate lemony dessert.
The Strawberry Cream Cheese Icebox Cake is a light and creamy dessert.
Neither recipe requires using an oven.
Looking for something for the kiddies to do? These recipes could be fun projects.

Stay safe and well, everyone!

Cheesecake with Strawberry Glaze from the 1960’s Argo® Cornstarch Box

Links for Cheesecake and Cheese Recipes

Shake well
12 ounce can evaporated milk
Place it, along with a large mixing bowl and beaters, in the freezer.
Chill for at least 1 hour.

Place in a small mixing bowl
1/2 Cup boiling water
Stir in until completely blended
3 ounce package lemon jello
Stir in
1/2 Cup cold water
Place the bowl in the refrigerator.
Leave it there until the jello is slightly thickened, about 30 minutes.

Take from the freezer the can of milk, the mixing bowl and beaters.
Pour into the bowl the cold can of evaporated milk
Beat on high speed until fluffy, about 3 minutes.
It should be similar to the consistency of stiffly beaten egg whites.
Beat in the cream cheese/jello mixture.

Gently spread the filling over the chilled crumb crust.
Top with the remaining crumbs.
Refrigerate at least 4 hours. (It's better to refrigerate it overnight.)
Cut into squares and serve.

Wash
2 pounds strawberries
Cut the tops off of the strawberries and slice them 1/4 inch thick.
Set aside.

When serving, top with whipped topping and a sprinkling of graham cracker crumbs.

According to the Farmers’ Almanac:

There’ll be quite a few interesting and bright spots in the sky this month!

Along with Comet NEOWISE you’ll see the bright blue star, Vega, which will be the North Star 12,000 years from now.

If you look tonight or tomorrow, some time after midnight but before dawn, Mars will be near the Moon. Rising in the East after midnight, Mars is not as bright as Jupiter or Venus, and it’s found midway between them.
At midnight, you’ll see the brightest "star" in the sky, the yellow-white planet Jupiter. The bright "star" to its left is Saturn.

On July 14 Jupiter is at opposition to the Sun.
Look in that same eastward direction before 5 AM to see the Morning Star, Venus.

On July 17 Venus will be joined by the crescent Moon and Taurus’s orange star, Aldebaran. Enjoy it at pre-dawn when it outshines Mars in the south, and Jupiter setting in the west.


On July 20 Saturn has its own opposition. It is also at its closest and brightest for the year. With the new Moon on the same night, Saturn viewing should be perfect.
Posted by Margaret Ullrich at 4:28:00 PM No comments: