Happy Holidays, everyone.
Sending you and yours wishes for a happy year filled
with health, prosperity, love and loads of fun!

Thank you for visiting!
Hope to see you throughout 2019 ~
Margaret
Posted by Margaret Ullrich at 5:10:00 AM 2 comments: Links to this post 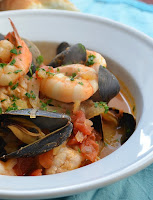 Everyone has traditional Christmas recipes - as well as a few old favourites - so I didn’t post any new recipes.
I posted Ma’s East Coast Seafood Chowder as a suggestion for other seniors who might like to simplify the seven fish for Christmas Eve tradition.

Over the past month over 12,000 of you dear folks have looked up recipes in this blog.
Thank you for visiting - I’m glad I could be of help.
I hope you, your friends and families enjoyed the festivities at your table.

There are also a few food traditions for New Year’s Eve and Day.
I’ve heard that some customs will even bring you wealth and luck.
Well, anyway, they’re a bit of fun and fine recipes for when folks gather to celebrate the coming year.

Eat poor on New Year’s and eat fat the rest of the year is something folks say in the southern United States, where they usually eat black-eyed peas, along with ham, greens, and cornbread on New Year’s Day in the hope that the meal will bring good luck and wealth.
Greens represent the green bills, while peas and cornbread stands for coins and gold.
Lentils and beans also promise a shower of coins in the coming year.

Along with American southerners, many other folks eat pork on New Year’s Day.
The thinking goes that pigs root around in a forward motion, so pork symbolizes progress for the coming year.
I know... practically all animals walk in a forward motion, but, for some reason, folks focused on pigs for this good luck custom.
If you’re planning to serve leftover turkey a side dish flavoured with pork, ham or sausage is fine.
A side dish of pork and beans, even if it’s canned, works just as well to get the New Year's luck mojo working.

The Pennsylvania Dutch have a similar pork recipe for success.
They don’t feature collared greens as the southerners do, but serve cabbage or sauerkraut with the pork to guarantee good luck and good fortune in the new year.

In Germany it’s believed that eating sauerkraut on New Year's Eve will bring blessings and wealth.
Before the meal those seated wish each other as much goodness and money as the number of shreds of cabbage in the pot of sauerkraut.
It’s time to really shred that head of cabbage!

Fish symbolize abundance in the new year. Asians feast on whole fish to celebrate Lunar New year, while Europeans eat cod, herring, and carp. The silvery scales stand for coinage.
A few weeks ago I posted Ma’s recipe for East Coast Seafood Chowder.
It should bring some luck on New Year’s Eve, too.

Fruits and grains also have their place on New Year’s Eve:
People in Spain and Mexico eat 12 grapes at midnight for luck for in the new year.

In Greece people throw pomegranates to the floor to release a flood of seeds that symbolize life and abundance.
A generous sprinkling of pomegranate seeds on a bowl of pudding should do the job, and is way less messy.

Extra long noodles are thought to bring long life if you eat them without breaking them in the middle, and rice is all about fertility and wealth.

And for dessert… ring shaped cakes and rounded sweet treats bring a full circle of luck to the eater.
Hope you made - or bought - some round cookies for Christmas and have a few left.

Here’s an easy way to prepare A New Year Pork Roast
Preheat oven to 350º F
Combine
1 Tablespoon garlic powder
1/2 Tablespoon dried sage
Rub the mixture over
2 pound boneless pork loin roast
Place the meat in a baking pan or casserole.
Surround the meat with
4 Cups sauerkraut
Cover and bake in preheated oven for 40 minutes to 1 hour.
You want the internal temperature has reached 145º F
Remove roast to a platter and surround with sauerkraut.
Serve with cornbread and beans extra luck.

If you prefer shredded cabbage, sprinkle it with vinegar and dill.

About the timing for the pork roast:
Some roasts are on the squarish side, some are more like a long sausage.
If your roast is on the long side, and you prefer it a bit pink, 40 to 45 minutes
should be enough.
Take it out after 40 minutes and check.

Back to the Seafood Chowder…
Next time you’re in your market take a peek at the bagged seafood mixtures.
One I often use has squid, shrimp, cuttlefish, octopus, mussels and clams.
Add some cubed cod - or if you really feel like celebrating, some lobster - and you’ll have the seven items needed for the Christmas Eve traditional dish.
You could also buy a box of bacon-wrapped scallops, heat and serve as an appetizer.
Seven fish - no problem.

About that bagged mix, the shrimp is on the tiny size.
Some larger shrimp tossed into the pot would add to the presentation.

Stir in
the thawed seafood and mussels
Bring to a boil.
Lower heat, cover and simmer 7 minutes or until mussels open.
Remove the mussels that don’t open.
Ladle soup into bowls.
Sprinkle over each serving
chopped parsley (optional)


Serve with warm, crusty bread to sop up the broth.

Happy New Year!!
Posted by Margaret Ullrich at 3:21:00 PM No comments: Links to this post

Back in December, 2010, I posted the recipe for Ma’s Fritto Misto di Pesce. Don’t bother with google translate - it’s a recipe for a mixed fix fry.
I posted it because I had written about Italian and Maltese Christmas customs.
One of these customs involves eating seven fishes on Christmas Eve.
Back in Malta and Sicily Christmas Eve, also known as the Feast of the Seven Fishes, was a night of seafood splendour.

Most of these holiday customs began when families were larger than they are today, and it wasn’t unusual to have about thirty people around the table.
So, you - and six of the other women - could each prepare one dish, each guest could scoop out one piece from each dish, and, wall-ah!, tradition was respected.

As the years went by and younger family members got busy with their own nuclear families, our parents’ generation made a few adjustments in their holiday menus.
They wanted to keep up the traditions, but there was a limit to how much they could eat, and could fit in their refrigerators.
The fried fish is a bit heavy on a senior’s stomach, so they turned to making chowders.
The leftover soup made a nice light supper for two on Christmas Day.

For a smokier flavour, replace the butter with 3 slices bacon, chopped, and brown before adding the vegetables.

While the potatoes are cooking, place in another large pot
2 Tablespoons butter
Melt butter over medium heat.
Add
3 ounces salmon, cut into chunks
3 ounces halibut, cut into chunks
Cook until fish is opaque and flakes easily with a fork.
Add
3 ounces lobster
3 ounces scallops
12 shrimp
12 scrubbed mussels
12 scrubbed clams
Once the clams and mussels have opened (discard any that did not open), transfer the seafood into the chowder base.
Simmer 3 minutes.

Ladle into bowls and place dill and a dab of butter on each serving (optional).
Serve with crusty rolls or bread.
Posted by Margaret Ullrich at 6:06:00 PM 4 comments: Links to this post