Kung Hei Fat Choy!
On Friday the new moon with usher in the Year of the Rat, the Yang Metal Rat, to be exact.
The festivities start with the new moon and last until the full moon rises.
That’s plenty of time to party hearty!!

A New Year always means a new beginning.
To celebrate properly one should have paid off all debts, purchased new clothes, painted the front door, and gotten a new haircut.
Maybe trying a new recipe counts, too.

There are many different food traditions observed over the New Year period:
Traditional dishes are steamed rice pudding, long noodles, and dumplings
Uncut noodles is a symbol of longevity
Fish and chicken are symbols of prosperity
Eat oranges and tangerines for luck, wealth, good health, and a long life
For happiness and wealth, eat persimmons

Two other posts that have more Chinese New Year customs:

Homes are cleaned before the beginning of the new year, so do try to give the place a quick once over.
And put away all cleaning equipment before New Year's Eve because good fortune may be swept away if you are tempted to clean on New Year's Day.
Don't use sharp knives or scissors on New Year’s Day as you may cut off good fortune.
Your behaviour on New Year’s Day sets the tone for the year.
No pressure.

Many people avoid meat on the first day to bring good luck in the New Year.
Day seven is the birthday of human beings. Long noodles (for longevity) and raw fish (for success) are traditionally eaten on that day.
On the 13th day, people eat rice congee and mustard greens to settle their stomachs.
The 14th day is spent getting ready for the Lantern Festival and eating leftovers.

The first Fried Rice recipe would be perfect for Day 14, or any day when you have leftover bits of a roast, or have cooked too much rice.
Waste not, want not.

You could also add sliced mushrooms and/or celery with the peas and carrots.

Both recipes can also be prepared with half chicken and half shrimp or all shrimp.

About recipe #1… Have some leftover turkey, beef or pork? That would be good, too.

About recipe #2… You can prepare it with more or less garlic powder or ground ginger.
You can also use 1 cup frozen carrots, or 2 cups peas and carrots.

Have on hand
8 to 12 ounces cooked peas and carrots, or thawed
1 teaspoon minced garlic
3 Cups cooked white rice
about a pound of cooked chicken, cut in bite-sized pieces (see hints)

In a small bowl beat
3 eggs

Place in a large skillet
2 Tablespoons oil
Heat the oil over medium high heat.
Add
The beaten eggs and stir fry until cooked.
Remove the eggs from the skillet and set them aside.

Place in the same skillet
2 Tablespoons oil
Add
the chopped onion
the peas and carrots
the minced garlic
Stir fry until the onion is tender.
Lower the heat to and add
the 3 Cups cooked rice
1/8 - 1/4 Cup soy sauce
The cooked chicken
Blend all together well and stir fry until thoroughly heated, about 5 minutes.
Add the eggs back to the skillet and stir to combine.
Remove from heat.
Top with chopped green onion (optional) and serve.

Finely chop
1 onion
You want to have 1 Cup of chopped onion.

Thinly slice
carrots
You want to have 1 Cup of sliced carrots.
Place in a large skillet
1 Tablespoon oil
Heat on high heat.
Add
the cut up chicken
Stirring constantly, cook 8 minutes, or until chicken is cooked through. 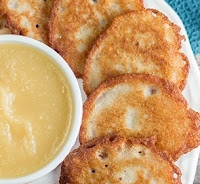 Happy New Year!
I hope this will be the start of a great year and an even better decade for you.

I’ve noticed that the post ‘Hoito Restaurant’s Finnish Pancake Recipe’ has regularly been a popular one.
I’m glad you’ve been enjoying it, and I’m going to post more pancake recipes.
In fact, today I’ll start with two!

Tomorrow’s full moon is the Full Wolf Moon, so named because in midwinter the wolves howled hungrily outside native villages.
Sometimes it was also called the Old Moon, or the Moon After Yule.
There will also be also a full Wolf Moon Eclipse, which will be visible in Asia, Australia, Europe, and Africa.
North Americans will not be able to see it since it takes place during our daytime.
Oh, well, there’s bound to be one we’ll be able to see, too.

For both: Don’t crowd - you want the pancakes to brown and be easy to flip.

About the German Potato Pancakes…
If this is your first time making potato pancakes, relax.
German potato pancakes are a bit more forgiving than latkes, and have ingredients most folks have in their pantries.
Don't bother patting to dry the potatoes. The flour takes care of any remaining liquid.
If a little seeps while it’s frying it will add a bit of crispiness to the edges.

They can be served with fried apple slices and maple syrup for a brunch.
They are also good with cranberry sauce.
Good to know if you’re serving them as a side dish with poultry.

Leftover pancakes can be used in sandwiches.
Just butter the bread, layer the pancakes, and season with salt and pepper.

~~
About the Latkes…
Latkes recipes demand that the potatoes be as dry as possible.
Russets, high in starch with a dry, mealy texture, work best since their dryness helps to create a crispy texture.
You can use the large shredding blade on your food processor to grate the vegetables.

Matzo meal is made by grinding matzo, an unleavened cracker, into coarse crumbs.
Give the matzo crumbs a few minutes to absorb the liquid before frying.
Use your fingers to blend the potato starch into the potato mixture.

Traditional recipes call for latkes to be fried in a blend of half oil and half schmaltz, which is clarified chicken or goose fat.
It is sometimes flavoured with onion, and is a staple of traditional Jewish cooking.
You can also just use an oil like peanut, canola, or olive.
When you flip the latkes they should hold together and not break apart.

After frying latkes can be kept warm in a 200° F oven for up to 30 minutes.
Refrigerate leftovers in an airtight container.
Recrisp in a 300° F for 5 to 10 minutes.

Peel and shred
6 medium potatoes
Place in a colander over a bowl to drain away excess liquid.

Place in a griddle
1/4 cup vegetable oil
Allow the oil to heat to 350º - 400º F.
Drop heaping tablespoonfuls of the potato mixture into the griddle.
Press each mound to flatten and let brown on one side, about 3 minutes.
Flip the pancakes over and cook for another 3 minutes.
The pancakes should be browned and crispy.
Drain on paper towels, then remove to warmed plates and keep warm.
Repeat until all of the mixture is used.

They are traditionally topped with sugar and served with applesauce on the side.
For more of a meal, serve with bratwurst sausage and boiled cabbage.

Arrange a rack in the middle of the oven and heat to 200° F.
Line 1 rimmed baking sheet with a double layer of paper towels.
Fit a wire cooling rack into another baking sheet.
Set both aside.

Line a bowl with three layers of cheesecloth.
Grate into the cheesecloth lined bowl
the prepared potatoes and onion
Gather the corners of the cloths and tie around the handle of a wooden spoon.
Hold the bag over the bowl and squeeze the liquid from the vegetables.
Squeeze as hard as you can until no more liquid comes out of the vegetables.
Set the vegetables aside and give the liquid a few minutes so the starch will settle.
Pour off and discard the liquid but leave the potato starch in the bowl.

Place in a large skillet
1 cup canola oil or chicken schmaltz, or a combination of both
You want enough to have a depth of 1/4 inch of fat.
Heat over medium-high heat until a piece of the latke mixture sizzles immediately.

Scoop 1/4 cup of the mixture, drop into the skillet, and flatten to make 4-inch patties.
Repeat until the skillet has a few pancakes in it.
Cook until a dark brown, 4 to 5 minutes per side, adjusting the heat if necessary.
Place the latkes on the paper towelilined baking sheet to drain for 2 minutes.
Transfer the latkes to the wire cooling rack set in the other baking sheet.
Keep warm in the oven for up to 30 minutes while you cook the remaining batter.

Serve with applesauce and sour cream.
Posted by Margaret Ullrich at 3:29:00 PM No comments:

Happy New Year, everyone!
Sending you and yours wishes for a happy year filled
with health, prosperity, love and loads of fun!

Thank you for visiting ~
Hope to see you throughout 2020!