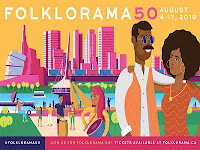 It was a great success this year, as it has been over the past.
The pavilions were filled with happy visitors of all ages, enthusiastic and helpful volunteers, interesting and informative cultural displays, lively and varied entertainment, and delicious, authentic food.


On to the next 50 wonderful years, Folklorama!

If you’d like to sample some Folklorama dishes, here is a list of the posts I’ve done over the past months which have the recipes used during Folklorama in 1980.

The Pavilion of Scotland      Scottish Shortbread

It’s been seven weeks since I started posting about Folklorama in 1980.

It’s interesting to see how the festival has grown and changed over the years, reflecting how Winnipeg has done the same.

Some of the pavilions in the current Folklorama50 brochure are new additions, reflecting the new waves of immigration.
And some pavilions, such the Mennonite, the Slovakia and the Lithuania Pavilions are no longer with us.
The people are still here, but sometimes there aren’t enough volunteers to keep the pavilion going.
It does take a lot of work to setup and take down the exhibits, not to mention providing entertainment, and then there's all that’s involved in feeding the crowds who come every night for the shows.

Today we’ll look back at two pavilions which are now just a memory - the Lebanon and the Dutch Pavilions.
Both of them were popular in their day, with fun, family-oriented entertainment and delicious food.

The Lebanon Pavilion took place at Prince Charles School, 1075 Wellington Avenue.
Its sponsor, the Lebanese Association of Canada Incorporated, said in the brochure
Come to Lebanon and live the life of a Sultan.
Well, who could resist that?

In addition to the costumes, there were exhibits of Lebanese-made cutlery and musical instruments, such as argil pipes.
Entertainment was provided by folk dancers - yes, they were belly dancers - performing to taped music while guests dined on national dishes, such as Lahm Mishwi in Khubz, Kibbi, followed by Ahwi or a Lebanese cocktail.
For dessert there were pastries, including Qras-bil-ajwi, Baqlawa and amardeen.

Along with the usual souvenirs, there were Lebanese cookbooks (in English) on sale.
I still have a copy and the recipes are excellent.

The Dutch Pavilion was at another school, Kelvin High School, 155 Kingsway Avenue.
The Dutch Canadian Society of Manitoba Inc., always put on an excellent show.
The highlight for the kiddies was eating the hot and fresh from the oven Speculass cookies which had been rolled out and baked while they watched.
The classrooms were filled with displays of folk art and crafts, historical items of the Netherlands, and windmills.
There was also a man carving wooden shoes in one classroom.

Along with many beautiful Delft items, there were boxes of chocolates, some shaped like wooden shoes, available for purchase.
In addition to eating the cookies, children enjoyed watching a puppet show and snacking on hot dogs and french fries, while we adults ate Dutch sausages on a bun, croquettes, Gouda cheese and Olie bolen, washed down with Dutch Citroen Jenever, Dutch Advocat brandy, Boere Jongens, Heineken beer, and Orange Boom beer.

There was no problem with the extra calories.
The Klompen Dancers, as well as Dutch Folk Singers and Dancers, invited everyone to participate in their activities.
In addition, during the final show, everyone was asked to join in their huge conga line and dance out of the building.

I do miss the sights and sounds of the Dutch Pavilion and will always remember the warm Welkome they gave to everyone.

Folklorama is happening now!
Be sure to visit a pavilion or two or twenty!!

Don't have yeast cakes for the bread, Khubz?
Substitute 1/4 ounce (2 1/4 teaspoons) dry yeast for every ounce (or cake) of compressed yeast.
While kneading the bread dough occasionally dip your hands in a bowl of water to give it a smooth, elastic finish.
The Khubz freezes well.

About the Meat Croquetten…
They can also be shaped into small round balls, deep fried, and served with cocktails.
Chicken can be used instead of beef.

The Maggi seasoning can be replaced by any bouillon concentrate powder or seasoning sauce you prefer.

Place in a large bowl
6 Cups flour
2 teaspoons salt
Make a depression in the centre.

Combine in a medium bowl
1 1/2 Cups lukewarm water
1/3 Cup milk
the dissolved yeast / water mixture
Pour the mixture into the flour depression.
Mix flour with liquid, making sure all the batter is worked into the dough.
Knead until a smooth dough results and the sides of the bowl are clean.

Cover the bowl with a towel.
Let rise in a warm place until it doubles in size, about 2 to 4 hours.
Grab orange-size balls from edge of dough and form into smooth balls.
Place on a cloth, cover, and let rise 30 minutes.

Heat oven to 475º F.
Place dough directly on racks in oven.
As soon as the dough rises into a mound (2 to 5 minutes) place them under a broiler for a few seconds until lightly browned.

Place in a saucepan
3/4 pound stewing beef
enough water to barely cover the meat
1 bay leaf
Bring to a boil, then reduce heat.
Add
1 large onion, chopped
Simmer until the meat is well done.
Turn off the heat.
With a slotted spoon take the meat out and place it on a cutting board.
Chop the meat very finely and set aside.

Pour the broth into a measuring cup.
You’ll need 2 Cups liquid.
Add water if you don’t have enough broth.

Place in a large pot
7 Tablespoons butter
Melt over medium heat and add, stirring constantly
1 cup flour
Continue cooking and stirring until the mixture is golden.
Stir in the broth and continue stirring until the mixture is thick.
Add
1 teaspoon Maggi seasoning
3/4 teaspoon salt
1/4 teaspoon pepper
1/2 Tablespoon parsley flakes
Remove from head and add the finely chopped meat.
Cool and place mixture into a pan.
Cover and place in refrigerator until cold.
When thoroughly chilled, shape mixture into rolls, about 1 x 4 inches.

Roll the meat rolls in bread crumbs, then in the beaten eggs, then again in the crumbs.
Put the rolls in the refrigerator for an hour or more.

In a large pot heat to 400º F
enough oil for deep frying
Fry the rolls, a few at a time, until brown.
Drain on absorbent paper towels.
Posted by Margaret Ullrich at 7:04:00 AM No comments:

Some of the pavilions you’ll find in this year’s Folklorama are new, reflecting the changes that have taken place in Winnipeg’s population.
Many of the older pavilions, some under a new name, are still with us.
Some pavilions, sadly, are no longer available.

In the June 16 Folklorama post I mentioned that the Mennonite Pavilion is just a memory now.
So are the Slovakia and the Lithuania Pavilions.
For different reasons these pavilions, as well as a few others over the years, have stopped.
We’ll take a look back at a few during this and the next post.

In 1980 the folks at the Slovakia Pavilion wished everyone Vitajte! - Welcome! - to their pavilion, Bratislava, which was in the parish church, Visitation of Our Lady Slovak Church at 353 Mountain Avenue.

The volunteers had displays of creative art, beautiful crystals, intricate embroidery, hand carvings and other crafts representative of Slovakia.
The Slovak Band performed folk music every evening while visitors enjoyed Slovak main dishes such as dumplings, halusky, pirohy and sausages, and desserts, which included Slovak cakes and pastries.
In addition to soft drinks, there were imported drinks - Slivovica, Palenka, Pizenske and Pivo - as well as domestic liquors and beers.

The parish, Visitation of Our Lady Slovak Church, is no longer with us.
Its history shows how immigrants come to Winnipeg, develop a strong community, and then disperse throughout the city, often in a matter of decades.
A Slovak-speaking priest arrived in Winnipeg in 1922.
In 1937 the people began lobbying for a permanent Slovak-speaking priest.
Father John Rekem arrived in 1949 and construction of the church began in 1952.
The parish thrived at first, but then numbers dwindled as parishioners moved away.
The parish was closed in 1999 and the church is now the Ethiopian Orthodox Church.

In 1980 the Lithuanian Community of Winnipeg said Kvieciame! (We are calling!) in their introduction to their pavilion, Vilnius, in which they displayed objects handcrafted from amber and woven fabrics which were heavily embroidered.
The Lithuanian Pavilion was located at St. Casimir Church at 432 Elgin Avenue.

As with the other pavilions from Eastern Europe, the food was the main attraction.
Guests enjoyed dinners of sausages with potatoes and sauerkraut, as well as Kaldunai topped with sauce, followed by Lithuanian pastries, cakes and cookies.
There were mixed drinks, beer, wine and honey mead, as well as coffee, tea milk and soft drinks.

Founded in 1953, St. Casimir, dedicated in 1956, served the needs of the Lithuanian immigrants in Winnipeg for many years.
The parish came to an end after the death of Msgr. Bertasius in 1999.
The church is now being used by Amazing Grace Ministry.
And so it goes...

About the Virtiniai…
The recipe in the program ended with the pinching.
Here’s where it comes in handy to live in the north end of Winnipeg.
I got some neighbourly hints:
The dough dries out very fast.
Work 1/4 of it at a time, covering the remainder with plastic wrap.

Drop each dumpling gently into boiling salted water, simmer for about 10 to 15 minutes, then remove with a slotted spoon.
Serve with melted butter, sour cream and crispy bacon.

Sift into a large bowl
4 Cups flour
1 teaspoon salt
Add
1 teaspoon vanilla
the yeast / milk mixture.
Cut in
1/2 pound lard or shortening
Add, 1 at a time
4 eggs
Beat well after every addition.
Place the dough in the refrigerator overnight.

Roll the dough out 1/4 inch thick.
Spread the filling over the surface.
Roll like a jelly roll, and place on a cookie sheet.
Brush top with the egg / milk mixture.
Bake in a 350º F oven for 30 to 35 minutes, or until brown.

Place in a medium bowl
3 Cups flour
Make a well in the centre.
Add
the egg mixture
1 teaspoon oil
Stir, with a wooden spoon or by hand, until all is worked together into a dough.

Sprinkle flour over work area and roll dough 1/8 inch thick.
Shape the meat mixture into patties using a tablespoon of mixture for each pattie.
Place pattie on dough near edge about 1 inch apart.
Cut dough into long strips so there is a narrow edge on both sides of the patties.
Cut a second strip the same width and cover the patties.
Cut dough around patties with a small glass or cup.
Seal edges by pinching with fingers.
Posted by Margaret Ullrich at 7:36:00 AM No comments: