Father's Day, Then and Now, by Margaret Ullrich 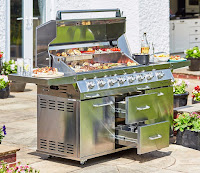 I want to wish a Happy Father's Day to all dads, nannus and uncles. I also want to wish a happy day to everyone who is working to keep us healthy and supplied with food and necessities.
Thank you for everything you are doing during these times.

This is not like any Father's Day we've ever had, but I'm hoping it will give you nice memories!

This is a story I wrote in 2006 for my CKUW show. Hope that the weather will co-operate and that it gives you a chuckle.
Stay safe and well, everyone!

I hope all you Dads will have a great Father's Day.

In the fifties, Father's Day was pretty simple.  It was a snap to shop for Dads.  Moms were hard.  There were so many different toilet waters.  Lipstick colors changed every year.  One year Lucille Ball Red was popular.  The next year every lady was wearing Flaming Fuschia.  I mean, how was an elementary school kid supposed to know what to get?
Dads were easy.  They always needed a pair of socks or another tie.  There WAS something about an Aqua Velva man.  The bottles of blue water came in a variety of sizes and they were all cheap.  If you had to soften Dad up for the report card that was coming, you could splurge on Old Spice or English Leather for a few pennies more.

If you'd blown all your money for Mother's Day - an easy thing to do - you could get another tube of Brylcreme.  Those little dabs went fast and Dad always needed another tube so he could look debonaire and Mom could run her fingers through his hair.

Keeping the family car spiffy has always been a Dad's job.  Remember when they were unwrapping their presents in the movie A Christmas Story?  Dad Darren McGavin was thrilled to get a tin of Simonize for his car.  It was big.  It was heavy.  It was cheap.

That was the Golden Age for Dads gifts.  But now?  Let's just say that Dads are getting to be as big a problem as Moms are, gift-wise.

I always thought of men as being rough and ready in their grooming needs.  I raised a son.  He once took a bath, answered nature's call, then went straight to drying everything - and I mean everything - with the bath towel.  He thought cutting out a small step would save some time.  At least that was his explanation when I asked him about the skid marks on the yellow towel.

Now men have discovered their inner Alan Alda.  They know about brands like Nivea.  Soap on a rope has lost its oomph.  Blades and a can of Barbasol just won't cut it anymore.  Guys have discovered grooming sets: shower gels, body washes, face scrubs, after shave balms and a post shave soother that the nice sales clerk swore will control his beard's growth.  You know, the same crap and sales pitches they've been throwing at women for years.

And for the guy who's really into his feminine side, there are events like the Papa-razzi Package at the Fairmont Hotel in Vancouver.  The 36 hour getaway includes an hour-long massage, a facial, foot care, a souvenir shaving kit and a round of golf.  The package costs $2,165 plus taxes and airfare if you don't happen to live in Vancouver.  Hey, femininity never came cheap.

Tools have always been popular gifts.  Something is always getting lost or broken, right?  Time was when, after being showered with a 32 piece wrench set, a 14 piece clamp set and a 65 piece screwdriver set, every Dad was ready, willing and eager to wrench, clamp and screw any and everything in the house.

Fellows, I was wondering… if a man receives a 205 piece drill and screwdriving set (consisting of screw driving bits, nut driving bits, spade bits, high speed drill bits, hole saws, masonry drill bits, sanding drums and a countersink which, I've been told, are ideal to use on wood, metal, plastic, brick, mortar and concrete) would he really use them all or just stick to a half dozen favorite pieces?  You know, the way we women use the same favorite spoons and pans in the kitchen.  Sometimes wretched excess is just, well, excessive.

Speaking of the kitchen, a Dad's cooking used to be basic.  Raw meat plus fire equaled hard small hockey pucks served with ketchup and relish in a bun.  Raw onion slices were added for the July first weekend.  Up to now the most exciting thing I'd ever seen a man do at the barbecue was to stick a can of beer up a chicken's butt so it could stand and roast.  It looked almost patriotic.

Dads made simple basic food.  And healthy.  No E coli bacteria could ever survive a Dad's barbecue.

Now folks are dropping like flies because Dads have discovered cuisine.  Ketchup and mustard have disappeared.  Guys who flunked Geography and can't find their way to their in-laws across town without a CAA trip tik are now into Japanese, Mexican and Thai recipes.

While at the Liquor Commission, I picked up the freebie Flavours magazine.  On the cover it said, Sassy sauces for your grilled goodies.  Uh, huh.  I don't know what my Dad would've thought of things like sorrel-spinach sauce.  On salmon, yet.

There was also an article about the joys of salt water.  According to the folks at Flavours, soaking food in brine is the key to a killer barbecue.  I don't know.  I remember one picnic forty years ago when the boat tipped over, everyone and everything fell out and everything got doused with good old salty Atlantic Ocean water.  No one thought that was anything worth repeating ever again.

Oh, pull-lease!!  If God meant us to spend our short summers carving little sticks He never would've made those nice clean bags of bamboo skewers.  Life - and a Manitoba summer - is way too short for that kind of nonsense.
There was a time when a bag of coal big enough to burn down a house could warm the cockles of a Dad's heart.  It could keep a fellow busy for a whole summer's worth of Sundays.  Now charcoal has some competition.  Have you been exposed to Mesquite Flavoured wood chips?  Our neighbor, Lou, really loves mesquite.  He chopped some chips up and sprinkled them on the salad.  Okay.  Lou isn't quite right in the head.  Last week he served up what he called grilled pizza.  Uh, huh.  Like we didn't notice the take out boxes stacked next to his recycling.

We have an old gas barbecue that chugs along with 11,000 BTUs.  It has been doing a dandy job of turning meat into blackened briquets for quite a few happy family gatherings.  Have you seen the new barbecues?  When did guys start pimping their grills?  The big selling feature for these monsters is how many BTUs are under the hood.

I checked the dictionary.  BTU means British Thermal Units.  Well, that was a big help.  I needed to get BTU into terms I could understand.  I looked around my house and found that my gas water heater has 30,000 BTUs.  The heater is plastered with little notes from Furnaceman.  Cheery messages like: "Third degree burns can occur in six seconds when the water is 60º C.  Death is also possible."

Hmmm…  My water heater has 30,000 BTUs and it can get water hot enough to kill somebody.

A Kalamazoo Bread Breaker Two Dual-Fuel grill with an infrared rotisserie cradle system and a side burner has a 154,000 BTU capacity.  It has a temperature gauge that reaches 1000º F.  It also has nighttime grilling lights.  Why?  Would a middle-aged hubby, after his 3 a.m. pee, get an uncontrollable urge to wander out to the Kalamazoo and grill a couple of turkeys?

According to the manufacturer, it's geared to the "Man cook with fire" market segment.

Middle-aged men, who normally think it's a hassle to reheat leftovers in a microwave, are gathering around these monster barbecues and acting like a bunch of teenage boys.  They're checking under the hood, twisting dials and rattling off phrases like "Mounted smoker box… warming rack… hi-dome cooking lid… porcelain coated cooking grid… heat plates" with the same slobbering enthusiasm most had for their first car.

There are also barbecue accessories.  I'm not talking long handled forks and aprons that tell folks to kiss the cook.

The Centro food prep station is a buffet, cooler and more.  It can be connected to the barbecue to create a complete outdoor kitchen.  Hey, fellas!  There's a room that has all this stuff.  You're welcome to come and flex your cooking muscles all year round.  Sorry the oven only goes to 500º F, but, we girls have been able to crank out complete holiday dinners in it.  it's called the kitchen.

Maybe the Discovery Channel was trying to do a public service.  They had a special on the 1883 Krakatoa catastrophe.  When Krakatoa went Kabooie, it produced an ash cloud.  The ashes and gases reached 1000º.  Most of the people in a 30 mile radius were killed by the extremely hot air which liquified their lungs.
Dads, if some fool gave you the Bread Breaker, think of Al Gore and take it back.
The ozone layer will thank you.
The environment will thank you!
The lungs of everyone within 30 miles will thank you!!


And, most important, the family's burgers and wieners will thank you!!!
Posted by Margaret Ullrich at 1:54:00 PM No comments: