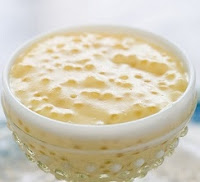 Another winter movie which has a bit of food in it is New in Town, which starred Renée Zellweger and Harry Connick Jr.
The wintery scenes were supposed to take place in New Ulm, Minnesota, but were actually filmed in Winnipeg and Selkirk, Manitoba.
It’s always a bit of a kick for Winnipeggers to see local places in a movie.

Well, in the movie Renée manages to save everybody’s jobs when she adapts a former yogurt production line to produce her secretary’s recipe for tapioca.
I know, that must be some tapioca recipe!

If you’ve never tried it, tapioca is a sweet pudding that is a bit lumpy.
It can be thin or thick or firm enough to eat with a fork.
You won’t find tapioca on any low-carb diets as it is pure starch, from the same plant as cassava.
You can find packaged tapioca mixes in the pudding section of your grocery store.
It’s fine if you’re in a rush.
Tapioca made with pearl tapioca takes a bit longer, but isn’t hard to do.

I haven’t a clue what Blanche Gunderson’s recipe has in it.
I do know what Ma’s recipe had, and that was pretty good, too.
I don’t know if it would save anybody’s job, but it would be a nice way to finish off a winter meal... or a meal any time of the year.

About the upcoming first eclipse of 2018, which will also be the first total lunar eclipse in over two years…
A lunar eclipse happens when the earth is positioned between the sun and the moon. Some indirect sunlight still escapes around the earth’s edges, giving the moon a bit of light. But this light is passing through the earth’s atmosphere, which filters out all blue and green light. So the only light that is passing through is a reddish-brown colour.
The moon will be reflecting this colour and is called a Blood Moon.
This full moon will be extra special since it is the second full moon of the month and will be called a “Blue Moon”.

This might be a good time to do some good deeds.
Tibetan Buddhists believe that the deeds you do - both good and bad - during a lunar eclipse are multiplied tenfold.

While you are cooking the tapioca the pudding will look watery. Don’t worry - the liquid will be absorbed as it cools.

If you don’t like a skin on your pudding you can press a piece of plastic wrap directly onto the top surface before you put the bowl of pudding in the refrigerator.
Yes, you can also do this with regular pudding.

After the pudding has cooled you can add either
minced maraschino cherries, and a teaspoon of almond extract, or
mandarin oranges, flaked coconut and drained, crushed pineapple or
whatever you like.

You can also just sprinkle servings with nutmeg or cinnamon.

Place in a large bowl
1/2 cup medium pearl tapioca
1 quart cold water
Cover and let soak for at least 12 hours.
Drain off the water and set the soaked pearls aside.

Place the saucepan with the milk mixture over low heat and bring to a simmer.
When the mixture begins to bubble, remove the pot from the heat.
Temper the eggs with the hot liquid by beating the eggs while adding the hot liquid a little at a time.

Once the two mixtures are completely combined, pour the custard back into the original pot and and add the tapioca. Beat constantly over low heat.
The mixture will begin to thicken and the pearls will become translucent.
Stir in
1 Tablespoon vanilla extract
Scrape the pudding into a bowl.
Chill in therefrigerator at least 2 hours.

January 28 - The waxing gibbous Moon can be located inside the Winter Circle asterism. The Winter Circle is really more the shape of a hexagon, and made up of these first-magnitude stars: Sirius, Rigel, Aldebaran, Capella, Castor, Pollux, and Procyon.

January 31 - Full Moon at 8:27 a.m. In this phase, the visible Moon is fully illuminated by direct sunlight.
We’re also getting a total lunar eclipse, which occur when the Earth passes between the Sun and Moon, and lines up precisely so that it blocks the Sun’s light, which otherwise reflects off the Moon. Learn more about this eclipse here.
January’s second full moon, the Blood Moon, is also called a Full Blue Moon.
Posted by Margaret Ullrich at 5:43:00 PM No comments: 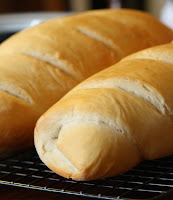 During the past months our southern neighbours have been in a tizzy over the various things that their president, Donald Trump, has been saying and doing.
Well, here in Canada we’ve have a bit of bad news to deal with, too.

Last December Loblaw Co., and its parent company George Weston Ltd., confirmed that they had told the Competition Bureau about an alleged industry-wide bread price-fixing scheme that had lasted from 2001 to 2015.
In other words, for 14 years grocery retailers have been coordinating bread price increases.
Some estimate that Loblaw alone got $1 billion in extra profit from the bread price-fixing.

Canadians have a reputation for being calm, polite folks.
Yeah, well, that only goes so far and nobody here is calm about having been robbed every time he or she bought a loaf of bread.
We’re not talking booze or cigarettes, an optional item that one should cut back on buying anyway.
Bread’s a basic, the staff of life, the thing we need to make the kids’ lunch sandwiches.

Some folks have gone so far as to swear off buying bread.
We folks of a certain age can remember when we were big on making things ourselves.
Ah, the seventies, when we made our own candles, yogurt, pasta and bread.
We did it then and we can do it now!

I got an email asking if I had the French bread recipe that was on the Safeway all purpose flour bag.
Of course I do.
I’ve got my method in the hints section, since I don’t use my mixer for bread making.
Suit yourself.

If Italian is more your thing, here’s the recipe for Ma’s crusty Italian bread.
And for the kiddies’ lunches, here’s Ma’s recipe for white bread.

This is how I adapted Safeway’s recipe to do it by hand:

Turn the dough out on a floured surface.
Knead in
About 1 - 1 1/2 Cups flour
Knead until it is smooth and elastic, about 15 minutes.
Shape the dough into a ball and place in a greased bowl.
Turn to cover all sides.

Cover and let rise in a warm place, about 1 1/2 hours.
It should be about doubled in bulk.
Punch down the dough and let rest 10 minutes.

Turn the dough out on a floured surface.
Cut it into 2 even pieces.
Roll one piece into a rectangle, about 10 x 15 inches.
Starting on a long side, roll up tightly, pressing dough at each turn.
Pinch the ends and loose edge to seal.
Roll ends between hands to taper them and tuck under.
Place diagonally, seam side down, on prepared pan.

Repeat with the remaining dough.

By hand stir in enough flour to make a soft dough (approximately 2 1/2 cups).
Turn the dough out onto lightly floured surface and gradually knead rest of flour (approximately 1 cup) into dough until dough is smooth and satiny (about 10 minutes). Do not under knead. Shape into ball.

Place in lightly greased bowl, turning once to grease surface.
Cover and let rise in a warm place 25ºC (80ºF) until double, about 1 1/2 hours.
Punch down; divide in half.
Cover and let rest 10 minutes.

Roll each half into a 38 x 30 cm rectangle.
Starting with long edge, roll up tightly, seal well.
Taper ends and tuck under.

January 15 - This week the star Mira — the first-ever variable star to be discovered — is expected to peak at its maximum brightness.

January 16 - New Moon at 7:07 p.m. In this phase, the Moon is not illuminated by direct sunlight and is completely invisible to the naked eye.

January 22 - The brightest of all stars shines prominently this week at around 10:30 p.m. local time over toward the south. Sirius, the “Dog Star,” is the brightest star of the constellation which bears the Latin name Canis Major — the Greater Dog.