Anna Sultana’s Scones with Clotted Cream, and the Sturgeon Moon with the Perseids Meteor Shower 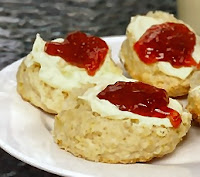 Summer is just flying by!
It seems like it was March just last week.
Now, here we are, August, with just a month left to enjoy summer before it's back to school.

The start of August is a fun time in Winnipeg.
For two weeks we celebrate Folklorama, where we get a chance to travel the world, yet are able to return to our own beds every night.
No worries if the mattress is too hard or soft.
I mean, what senior could ask for more.


The United Kingdom Pavilion is one of my favourites.
There you can see cultural displays and shows featuring the art and talents from England, Northern Ireland, Scotland and Wales.
They also have fun with theme nights - James Bond and Harry Potter to name a few.
While enjoying the show one can dine on traditional food or sample the treats at a traditional English Tea Room.
Ah...  a proper tea and scones!


A few weeks ago I posted the recipe for Ma’s Cream Scones.

Perfect for when you have a leftover cup or two of heavy cream.
But leftover cream can also be used to make clotted cream.

Clotted cream was mentioned in The Shepheardes Calendar, a poem written by Edmund Spenser in 1579:
Ne would she scorn the simple shepherd swain,
For she would call him often heam,
And give him curds and clouted cream.

Clotted cream, also called Devonshire or Cornish cream, is a thick cream made by heating cow's milk and then letting it cool slowly so that the cream rises to the surface and forms "clots”.
It has a nutty, cooked milk flavour and about the same amount of fat as butter.
Clotted cream can be added to mashed potatoes, risotto or scrambled eggs.
It is also delicious with berries, fruit, a slice of pie, or as a topping on any dessert you’re serving.
Well, just about any dessert... probably not on an iced cake.

Clotted cream is similar to kaymak, a delicacy that is made throughout the Middle East, southeast Europe, Iran, Afghanistan, India, and Turkey.
Don't know if the recipe got around or if everyone knew it was just a great way to use up leftover heavy cream.

In a rush? Have mascarpone? You’re in luck.
You can also use mascarpone to make fake Clotted Cream.

Beat until the mixture looks like softly whipped cream.
Use right away or cover and refrigerate the cream until serving time.
Makes about 1 1/2 cups

Not sure if you'll have any use for a tub of mascarpone?
It is a soft unripened cheese that has the texture of sour cream.
Its mild flavour is great with fresh fruit and it is an ingredient in Tiramisu.
You've probably enjoyed it already.

If you don’t have a double boiler place a heatproof bowl over a saucepan of water.

After you scrape off the thicker part of the clotted cream, you’ll be left with cream that is thinner than heavy cream.
Don't toss it. It can be added to beverages or dishes, as you would half and half.

The Clotted Cream will keep for about a week in your fridge.

Have butter with salt? Fine, use it for the scones, just don’t add the 1/4 teaspoon salt.

Heat over medium heat to bring the cream to 175º F, stirring occasionally so that the cream will heat evenly.
Once you reach 175º F, bring up the temperature to 200º and allow the cream to cook about 45 minutes to an hour. The cream should get a cracked skin.
Remove the top of your double boiler or bowl and place the container of cooked cream in a pan of ice water to cool quickly.
Cover the cream with plastic wrap and place the container in the refrigerator.
Let it sit overnight.
Carefully skim the clotted cream off with a shallow spoon and layer it into a bowl.
Serve it as you would serve butter.

Turn the dough out onto a floured surface and knead until the dough comes together.
Roll out the dough to an inch thick.
Cut into rounds with a biscuit cutter or a drinking glass.
Place the scones on the prepared cookie pan.
Brush the tops with the beaten egg.
Bake 8 minutes or until golden.

Don’t forget a pot of hot tea for the total experience!

About the sky next week, thanks to the folks at The Farmers' Almanac…

August 7 –  August’s full Sturgeon Moon at 2:11 p.m. Passing overhead at around 10 p.m. local daylight time this week are four small, faint constellations spread out near and within the Summer Triangle.  The Triangle itself is easy enough to find, being composed of three of the brightest stars in the sky (Vega, Altair and Deneb).

August 8 – Because the Moon is now in its waning gibbous phase, it rises in the east later and continues to rise later and later each evening until you can spot the daytime Moon over your western horizon after sunrise in the next few mornings.

August 11-13 – The Perseids Meteor Shower. August is often regarded as “meteor month” with the appearance of one of the best displays of the year. Viewing may be hindered by the bright glow of the waning gibbous Moon but still worth a look.
Best time to watch: After midnight and before dawn. These showers are named for the constellation Perseus but are bits and pieces of the Comet Swift-Tuttle which visited the inner part of the Solar System in 1992. These meteors, no bigger than grains of sand or pebbles with the consistency of cigar ash, enter the Earth’s atmosphere about 80 miles above its surface.
What you can expect: 50-100 meteors per hour
Posted by Margaret Ullrich at 10:19:00 AM