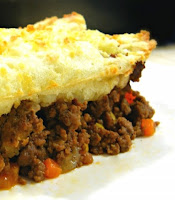 This past week we’ve enjoyed visiting Folklorama.
The theme nights at the United Kingdom Pavilion were fun, the dancing, singing and music were excellent, and the food was delicious.
The recipes reminded me a bit of some of the food Ma used to make.
Yes, she didn’t always cook Maltese recipes.

For a while in its long history, Malta was a part of the British Empire.
Of course, during war and peace times the British navy made use of our harbours.
British sailors being just regular folks after all, ate regular meals.
Of course, some of their recipes became known, and were enjoyed, by the Maltese.

One such recipe is Cottage Pie, which also has a long history.
In 1791 the potato was being introduced to Europeans as something that the poor - most of whom lived in cottages - could easily afford. The Cottage Pie recipe was a way to use leftover roasted meat. The pie dish was lined with mashed potatoes, as well as having a mashed potato crust on top.

In the United Kingdom, the name Shepherd's Pie appeared in 1854, and it is used when the meat is minced lamb or mutton, while Cottage Pie is used for pies made with minced beef. Both are meat pies with a topping of mashed potato, not pastry.

While not traditional, the mashed potatoes can be topped with grated cheese.
The fillings can also have a few variations:

If you don’t want to add the carrot and celery to the filling you can omit them, but add 1 teaspoon sugar instead.

If you’d like to add some peas to the filling - or have a zucchini you’d like to use - you can reduce the meat and add some. Just be sure to finely chop the zucchini.

The liquid in the filling will not evaporate when it bakes. If it appears too ‘soupy’ spoon out some of the liquid or allow it to simmer longer for the liquid to be reduced.

Be sure to steam dry the potatoes. If there is excess liquid in the potatoes it will make the sauce watery.

To get really creamy mashed potatoes, use a potato ricer or sieve. Be sure the mashed potatoes are hot when you spread them. Cold potatoes is harder to spread. You want a textured surface on the potato topping, so rough it up a bit. It’s like adding the meringue to a lemon meringue pie - the points become nicely browned bits and make it look more appetizing.

You can prepare the pie in a casserole in advance, then refrigerate or freeze.
You can also freeze in individual ovenproof dishes for an easy meal for one.
Remember to defrost at room temperature before baking as directed in the recipe.

For a crisp golden topping, flash under the broiler for a few minutes before serving.

Peel and cut into 1" cubes
2 1/2 pounds potatoes
Cook in boiling water for 15 minutes or until soft. Turn off the stove.
Drain, then return the potatoes to the pot and place it on the burner you had used.
Shake the pot briefly and allow the potatoes to steam dry for about a minute.

If you have a potato ricer or sieve, use it and return the riced potatoes to the pot before adding the remaining ingredients.
If you don’t have one, add to the dried potatoes
2 Tablespoons butter
Mash until melted.
Add
1/2 Cup milk
salt to taste
a dash of nutmeg (optional)
Mash until smooth.

Spread the potatoes onto the filling, and rough up the surface.
Drizzle with olive oil.
Sprinkle with grated parmesan or cheddar cheese (optional).
Bake for 25 - 30 minutes or until golden on top and bubbling on the edges.
Stick a knife into the middle to ensure it is piping hot.
Let stand for 5 minutes before serving.

August 14 – Look to the east before dawn to spot the last quarter Moon near Aldebaran, the 13th brightest star in the sky and one of the more colourful. It marks the orange eye of Taurus the Bull.

August 18 – Look to the east, one hour before sunrise, to spot the crescent Moon paired up with Venus. The waning crescent Moon will be at perigee, meaning it’s at its closest point to the Earth, which happens each month.

August 19 – Another chance to spot Venus with the tiny crescent Moon Look to the east, one hour before sunrise.

August 21 –  Total Solar Eclipse. This will mark the first time in this century, and the first time since 1979, that a total solar eclipse will cross the contiguous (48) United States (Alaska had its turn in 1990; Hawaii in 1991).
The shadow track - better known as the “path of totality” - will sweep only over the United States and no other country for the very first time, leading some to refer to this upcoming event as “The Great American Eclipse."
See which cities are in the best spot to view here.
Posted by Margaret Ullrich at 3:30:00 PM