Anna Sultana’s Meatloaf and Red Cabbage and A Christmas Story 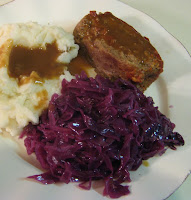 It seems to me that the flood of Christmas-themed movies begin earlier every year.
This year they began right after our Thanksgiving, and, to be honest, I don’t know where they find these movies.

Sometimes I wonder if it’s the same movie and they just changed the intro and end credits.
Oh, well, they’re a bit of mindless fluff to have playing in the background while we plow through our holiday baking.

One Christmas favourite I’m actually looking forward to seeing is the 1983 movie A Christmas Story, which was based on Jean Shepherd's stories about his childhood.
If you haven’t seen it, it takes place in the 1940s, and is about a boy who is desperate to convince his parents, his teacher, and Santa that a Red Ryder BB gun really is the perfect Christmas gift.

I know, a kid wants a gun for Christmas… well, trust me, it’s a nice movie, filled with scenes that bring back a lot of memories of how kids really are, especially as Christmas is getting closer.

The film also has quite a bit of food in it.
Ralphie tries to bribe his teacher with a huge fruit basket.
The family’s Christmas turkey is devoured by the neighbour’s dogs, and the family has to go to a Chinese restaurant for dinner.

And then there’s Randy, Ralphie’s kid brother, who is refusing to eat dinner.
Apparently he hasn’t eaten voluntarily in over three years.
There he sits, pushing his food around, muttering:
Meatloaf, smeatloaf, double beetloaf. I hate meatloaf.

Don’t worry, his Mom has a way to make him eat his meatloaf.
No crying, no bloodshed. She’s THAT good.

In honour of this paragon of motherhood, I usually make a meatloaf dinner around this time of year. Since Ralphie’s family doesn’t look Italian, let alone Maltese, I use the German recipes Ma made when her American sister-in-law came by.
Aunt Liz never quite knew what to make of a hard boiled egg in a meatloaf.
Ma served the meatloaf with red cabbage and mashed potatoes.

And, when you’re eating like the family in A Christmas Story, the German recipes are more proper than either Mediterranean twinkie meatloaf.

Another Christmas favourite of ours is the 1989 classic, National Lampoon's Christmas Vacation. Who can argue with Ellen Griswold:
I don't know what to say, except it's Christmas and we're all in misery.

These recipes make enough for 8 - 10 people.
If you’re family is smaller, no problem. Meatloaf is great the second, or third, time around. The leftovers are also good in a sandwich.

Sometimes Ma made this meatloaf using half ground beef and half pork - more or less in those proportions - depending on what she had in the fridge.

Mrs. Parker served the meatloaf and cabbage with mashed potatoes. I don’t know if she made them from scratch or from a box of instant. Ma always made homemade. Suit yourself.

Bring to the mixture to a boil over medium-high heat.
Reduce heat, cover, and simmer until the cabbage is tender, about 1 to 1 1/2 hours.

Preheat oven to 350º F
Place the mixture in the prepared pan.
Bake uncovered for 1 1/4 hours.
Remove from oven and let cool 10 minutes before serving.

If you’re curious, here are the other meatloaf recipes:

November 20 - Look for Saturn in the southwest after dusk, about 40 minutes after sunset. Catch it early; the ringed planet sets more than an hour after dark at the beginning of the month, but before the end of evening twilight by November 30th. This evening, look about 10° above the west-southwest horizon to sight a slender sliver of a crescent Moon. Mercury will also be hovering near the west-southwest horizon, directly below the Moon and Saturn.


November 23 - Look to the west after sunset to see Mercury right below Saturn. Mercury is usually difficult to spot but now it’s at its greatest elongation from the Sun so it’s a good time to see this “elusive” planet.
Posted by Margaret Ullrich at 8:28:00 AM