Our Dogs by Margaret Ullrich 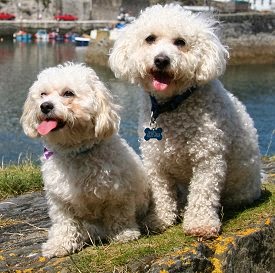 How did we become "the people with the dogs"?


In 1973 we were living in Surrey, British Columbia. Paul was working for a weekly newspaper and, because he had an irregular schedule, on Thursdays he came home at midnight. That particular Thursday I had spent canning peaches. Paul came in and a small brown animal scurried in with him. It was so small, we thought it was a rat. It turned out to be a spaniel pomeranian pup, about two months old.

After we dried her and fed her, she stumbled toward the empty box of B. C. peaches - in which we had placed a blanket - and promptly went to sleep. As near as we could figure, she was too small to have run away, so someone must have dumped her in the countryside. So, the next morning we named her Peaches.

Peaches was a girl with personality. Remember the blowsy spaniel with Peggy Lee's voice in Disney's Lady and the Tramp? Well, she reminds me of Peaches. Peaches had a certain style. Maybe in her heart she knew she'd been a love child. Any chance she got she'd sneak under fences and look for adventure. When we told her to "Do Bogart" she'd give out with a big toothy smile. She was a cosmopolitan lady who did it all. When we camped in the Rockies, she came along. When we flew to New York City and stayed in hotels, she came along. She was a dog of the world.


A few years after we moved to Winnipeg I decided to take some courses. We didn't want to leave Peaches alone, so we went to the pound to get her a companion. There we saw a bearded collie pup who had been a guest for as long as the city would allow. The clerk said the pup was scheduled to be put down. Not while the Ullrichs were there he wasn't! We brought him home and for some dumb reason, named him Herb.

When the Queen came in 1984 we had Peaches and Herb. For those who weren't into the disco scene, Peaches and Herb were a hot duo in the 70s. Remember "For Your Love" and "Shake Your Groove Thing"? Neither do I. I didn't plan to name my dogs after such a bad act. I just went with the flow.

Herb was a docile, sweet natured fellow who really came into his own when our son arrived. Herbie was a sheep dog and he took to babysitting like Nana did in Disney's Peter Pan.


When Peaches passed away in 1987 we thought we'd simplify our lives and have just one dog. That lasted until we had to go to the pet store for some medicine for our son's goldfish. Don't ever bring a kid to a pet store! The clerk put a cocker spaniel pup in Carl's arms, Carl reminded us his ninth birthday was around the corner and, you guessed it, we went home with a cocker spaniel.

Silky was the picture of Disney's cocker spaniel, Lady. And she knew it. Pull a camera out and she'd pose. But where Peaches gave out with big smiles, Silky perfected what came to be known as "Snarly Face". No kidding, she had an expression that you wouldn't want to see on some hulking guy in a dark alley.

Silky had attitude, a direct approach and a taste for makeup. Once we took her with us when we went to see "Shakespeare in the Park". There were some heavily made-up ballet dancers sitting on the sidelines, waiting their turn to perform. Silky made a beeline for one slender miss - ballet dancers are so tiny! - and knocked her over. Then Silky licked all the makeup off the girl. Luckily the dancer thought it was funny.

Silky wasn't what anyone would call a hunter. Do you remember when the wave petunia hit gardeners? I thought it would be a nice theme, so I bought lots of petunias - some waving, some just standing there. Either way, they were sitting ducks for the local bush bunnies. I tried to rescue 24 petunias by digging 24 alyssums out of the planter box, replacing the alyssums with the petunias and vice versa. I got a lot of exercise. So did the bunnies. They came, spotted the petunias in the planter and, quicker than you could say jack rabbit, hopped up 18 inches and ate the petunias. I let Silky out. Silky and the bunnies played hide and seek around the box, until Silky got tired and went to nap under the tree. Huh... Hunting dog, my Aunt Patootie.


When Herbie joined his Peaches, home didn't seem right with just one dog. So, back to the store. Paul had always had his heart set on having a sheltie. Instead we found a bichon frise who reminded us of Herbie. We named him Popcorn because he could jump like popcorn when it's being popped. That's our story and we're sticking to it.

Popcorn was only a few years younger than Silky, but it was deja vu all over again. Silky called the shots and Popcorn followed her lead. Popcorn's laid back style confused Silky. Silky wanted, no, needed to approach people. She loved kids, especially when they were small and holding food. But, sometimes her in your face approach scared the kids. Popcorn just stood shyly to one side. Within minutes, kids would be all over him, eager to pet "the quiet one". Popcorn beamed and got petted, while Silky seethed and stood alone. To the end, she never caught on to his technique.


A few months after Silky passed away, BoBo, another bichon frise, joined our family. I thought that since he was a bichon, his personality would be similar to Popcorn's. Nope. BoBo had his own style. While Popcorn stood with quiet dignity with front paws pointed straight ahead, Bobo looked like a drunken ballet dancer doing a first position. Only a blind person with a death wish would have wanted a seeing-eye dog like BoBo. He had to check out everything he saw when we took him for a walk. It was "Over here... No, no, over there."

The first summer we had BoBo I bought 4 packets of seedtape. That's 60 feet of alyssum. I prepared the soil, made the rows, tore and unrolled the strips, covered and watered. Our new bichon puppy, Bobo, watched my every move. The next day, while having lunch, we were gazing out our kitchen's picture window. Bobo and our 10 year old bichon, Popcorn, were frolicking. Ah, spring. It was a lovely sight. It was... until Bobo raced across with long green ribbons gripped in his mouth. The ribbons were waving in the breeze. Bobo looked like a Korean ribbon dancer in a puppy Folklorama pavillion. I checked. He'd managed to dig up every alyssum seed tape. Maybe he'd been a dancer in another life.


About the only trait our dogs shared was that of avoiding the doghouse. It was one of the first things we had installed when we moved to our present home 21 years ago. Paul built it from a kit and used some of the leftover shingles from our new garage. It was a beauty.

Herbie and Silky never went near it. I planted flowers near the door for some curb appeal. Still no takers. Figuring they needed a hint I put a plastic spaniel in the doorway. Herbie and Silky didn't even bother pushing the imposter over.

After Herbie died we got Popcorn. Silky taught him the house rules. Popcorn never went near the doghouse. That plastic spaniel lived alone in that doghouse until the year we got Bobo. Well, Bobo was an assertive little fellow. After spotting that fake in the doghouse Bobo barked his head off. Finally, I thought, we had a dog who'd use the doghouse. I removed the statue. BoBo stepped in, looked around, walked out and never went back.


Bobo was an Ullrich dog, alright.