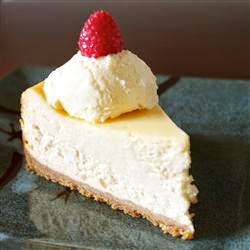 Back in January I posted a simple piece on my feelings about Cheesecake, New York and New Jersey style. I had flipped through Entertaining with The Sopranos and learned that, while the cheesecakes may look similar, they are different.


I should have stopped right there.


Oh, no... I had to continue:
I've heard about a cheesecake Winnipeggers made. The recipe used to be on a milk carton. It was the Co-op Refrigerator Cheesecake. A friend gave me an empty milk carton. I tried to fit in, be a real Winnipegger, but really. I couldn't believe it. Knox Gelatin? Heavy Cream? Separated eggs? CRUSHED PINEAPPLE? I think not.

Some things you just have to respect.


I should have respected the Co-Op Refrigerator Cheesecake.


I've received a few e mails.
Some defended Winnipeg's cheesecake honor.
Some asked if I still had that empty milk carton. They had always intended to, but never gotten around to, copying the recipe.
And some sent me the recipe and told me to try it again.


For those of you who never got around to copying the recipe, here it is.


Are we friends now?