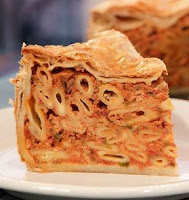 I was a little intimidated at the idea of making Carmela Soprano's Baked Ziti In Bianco. For anyone who ever saw the series, Carmela's Ziti was the stuff of legend. In the first season, cute little A.J. said his first televised cuss word because he was worried he wasn't going to get his mother's Ziti. Oh, how quickly they grow up. Whenever there was a problem, out came the Ziti.


This was going to be some plate of pasta.

The whole recipe was no problem. Boil pasta, make the sauce, cut up some cheese and ham, layer and bake.

But maybe that's why it was such an important meal for the kiddies. Like macaroni and cheese, it was basic comfort food. No wonder A.J. cussed.


I don't remember Ma making any sort of cream sauce. If there was sauce, it was red. Tomato red. Maybe with some meat.


The closest thing to Carmela's Ziti, comfort-wise, was Timpana. It also called for pasta, some cheese and meat. The sauce was tomato, naturally. The boiled pasta was mixed into the tomato meat sauce. A few raw eggs were added to up the protein and the cholesterol.


Ah, but then the Maltese touch was added.


Maltese cooking is heavy on simple carbs. Maltese go beyond simple into downright retarded. A pan filled with macaroni is not enough starch. Oh, no. What makes a Timpana unique is it is baked like an apple pie.

That's right. There's a layer of flaky or puff pastry lining the pan before the pasta is poured into it. Then the top is covered with another layer of pastry. If there's some pastry left over it's shaped like a leaf to decorate the top of the pasta pie. Then the top is brushed with beaten egg before it's baked. It comes out a glistening brown. You'd swear there was fruit in there. Well, you would until you smelled it.


But it was comfort food. Ma made it regularly. When all that starch hit our stomachs we could face anything. It anchored us. A gale force wind couldn't blow down somebody with Timpana in his belly.

The last time we visited my folks, Ma baked a Timpana for us to eat on the road. Hot or cold, it helped us face the world.


The Ziti was good. Pale, but good. I'd make it again.


Another two recipes down. Seventy-nine more to go.