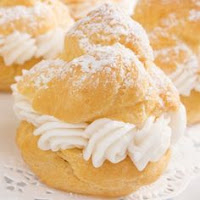 In North America St. Patrick gets all the Hallmark cards, parades, beer and press.  But, for the rest of Europe, March 17 is just another day.  And, in Italy and Malta, March 19 is the feast of St. Joseph, and that's when everybody celebrates.  Big time.

I looked through the holiday section of Entertaining with The Sopranos.  There it was, in black and white.  St. Joseph's Day.  Sfingi.  And, in tiny print under that, St. Joseph's Day Zeppole.

The Sopranos and the Sultanas are one.

Okay.  If you've never had a Sfingi/Zfineg, it's a tiny ball of puff pastry which is fried like a doughnut ball, split open and stuffed with a ricotta and candied citron filling.  The filling is strictly for St. Joseph's Day.  As it's explained in Entertaining with The Sopranos:

If it is not St. Joseph's Day, you can just shake these, without the filling, in a bag with cinnamon sugar and serve them like donuts.

No kidding.  Do not fill a Sfingi/Zfineg if it is not St. Joseph's Day.  Hey.  We're talking religion.  It doesn't have to make sense.  It just has to follow the rules and be done right.  Even for Tony and the boys, some things are sacred.

I always thought, with all the stress on St. Joseph's doughnuts, that he would be the perfect patron saint for Canada.  I mean, we Canadians love our donuts,  eh.  I checked.  St. Anne is the patron of Canada.  It's like the filling.  We're talking religion.  It doesn't have to make sense.  It just has to follow the rules and be done right.

It was really springlike for the first half of the week and we were enjoying long walks.  Walks are great, but they take time.  I didn't have time for recipes from Entertaining with The Sopranos.

Then, on Thursday, it was back to winter weather.  But Paul and I still had to go out.  His cartoon 'The Bicycle Lesson' had won an award.  (copy and paste to see it)
http://video.aol.co.uk/video-detail/the-bicycle-lesson/3975404776
A prestigious award.  He had been written up in 'The Times'.  The Community paper and flyers hadn't been delivered in our neighborhood for a while and Paul wanted copies.  So we walked over the the Free Press building.

When we got home we were freezing.
Carmela to the rescue.  Hot Buttered Rum.
She called it a classic.  Just the thing for a Winnipeg winter day.
It's in the book, so I'm counting it.

Another two recipes down.  Seventy more to go.

Here is a baked Sfingi recipe, if you'd rather not fry doughnuts.

Here's Bobby's recipe for Zeppole in his chapter If I Couldn't Eat, I'd F**king Die in Artie Bucco's The Sopranos Family Cookbook.
Posted by Margaret Ullrich at 8:00:00 AM