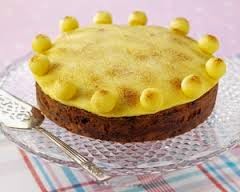 My grandmother lived with us.
She had worked as a cook for a British family in Malta.
Mothering Sunday was one of the British customs we continued to observe while I was growing up in New York.

Mothering Sunday may have originally derived from a 16th-century practice of visiting the 'mother church’, the main church in the region, on Laetare Sunday, the fourth Sunday of Lent.

Historically, this was also a time when domestic servants were given time off to travel and visit their families.

I'll to thee a Simnel Bring
'Gainst thou go'st a-Mothering
So that, when she blesseth thee,
Half that blessing thou'lt give me.
Robert Herrick

Just so you know…
The 11 balls represent the 11 Apostles, except for Judas.
That’s why this cake can also be served for Easter.

If your Mom likes a bit of a kick, 2 Tablespoons of sherry or her favourite drink (if it goes well with the fruit) may be brushed on the cake before adding the apricot jam.

If the cake is browning too quickly, cover with foil after an hour of baking.

During the baking seasons of Lent and Advent I pick up a dozen small eggs.
They won’t work exactly for the recipes, but they are just enough when I need to beat an egg for glazing, as in the end of this recipe.

If you have time, you can decorate the cake with crystallized or plain flowers.
Some also wrap a ribbon around the side.
Most don't.

At Easter the middle of the top of the cake can be decorated with small wrapped chocolate eggs, tiny chickies and such.
The kids love that!

Grease an 8 inch springform pan
Dust with flour and tap out the excess.
Line the bottom and sides with greased parchment paper.

Divide into 3 equal portions
1 pound almond paste
Roll out one portion of the almond paste to form an 8 inch circle.
Set the remaining portions aside for later.

In a large mixer bowl, beat at medium speed
1 Cup margarine, softened
1 Cup light brown sugar
Beat until the mixture is light and fluffy, about 5 minutes.
Add, one at a time
4 large eggs
Beat well after each addition.
Beat in the flour mixture until just blended.
Stir in the floured fruit.

Pour half of the batter into the prepared pan.
Place the circle of almond paste on the cake batter in the pan.
Gently cover the almond paste with the remaining cake batter.
Bake for 2 1/2 hours, or until evenly brown and firm to the touch.
Let cool in the pan for 10 minutes.
Remove the metal side frame, place cake on large cookie sheet.
Place the cake on a wire rack and cool completely.
Set oven to broil.

While the cake is cooling
Roll out one portion of the almond paste to form an 8 inch circle.
Divide the remaining portion into 11 pieces and roll each into a ball.

In a small cup beat
1 egg


Decorate if you wish and serve.
Posted by Margaret Ullrich at 10:02:00 AM