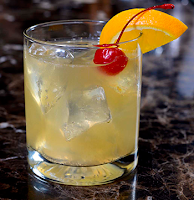 It’s been one of those summers here in Manitoba.
Sometimes it’s been too hot, or too rainy, or too windy, or too something to do anything.
This weekend it’s been too rainy and windy.

On August 24 it’s National Whiskey Sour Day.
After we looked out the window, we decided to celebrate early.
If you also live in Manitoba, maybe you’ll think that’s a good idea, too.
Can’t fight Mother Nature.

The first mention of a Whiskey Sour was in a newspaper published in Wisconsin in 1870.
The state of Wisconsin isn’t far from Manitoba.
Maybe they were having one of those summers, too.

You might also like to try the Ward 8.
It is based either in Bourbon or rye whiskey, with both lemon and orange juices, and grenadine syrup as the sweetener.
Do not add the egg white to the Ward 8.

Whiskey Sour can be served either straight up or over ice.

Some people add a dash of egg white.
If you add that, it’s called a Boston Sour.

Pour into a shaker
ice
1 1/2 ounces whiskey
1 1/2 ounces lemon juice
3/4 ounces simple syrup
Pour into an ice filled old-fashioned glass.
Garnish with a cherry.
Posted by Margaret Ullrich at 7:55:00 AM