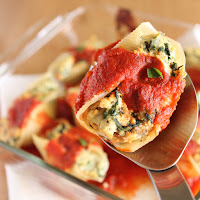 Hurrah! We’ve made it through January!
On to February and Groundhog Day.
If the groundhog sees its shadow on February 2 it will return to its burrow, and there will be six more weeks of winter.
If it does not see its shadow, then there will be an early Spring.

Whatever happens on Tuesday, there should be something on the table for dinner.
And even if we’re in for an early Spring, we're just entering February.
A good, hot, stick to the ribs pasta casserole would be enjoyed by the family.
February in Winnipeg is too soon for only a salad.

About the mozzarella cheese - you can use either regular or low fat.
You can also use fresh spinach instead of frozen.
Or, if you don’t have it in the house, you can leave the spinach out.

I know… some people don’t think it’s a real dinner if there isn’t meat in it.
You can also use cooked ground chicken or lean ground beef instead of the ricotta.

The stuffing works equally well with manicotti tubes and lasagne noodles.
Just spread the filling on the lasagne noodles, roll them up and place them in the pan.

The prepared shells in the casserole can also be refrigerated, covered, up to 24 hours.

Sometimes, when Ma was watching a rerun on TV, she'd make stuffed shells.
She would then place them on cookie pans and put them in the freezer.
When they were frozen, she'd place them in a plastic bag, seal tightly and freeze.

She could then take as many unthawed stuffed shells as she needed for a quick meal.
She'd place them in a layer of sauce in a casserole, cover them with sauce and bake.
For frozen stuffed shells, an hour in a 350º oven usually did the trick.
An extra sprinkling of shredded mozzarella cheese before baking is also good.

You’ll also need Tomato Sauce for this recipe.
This is a favourite of Ma’s and makes about 4 - 5 cups.
You can make the sauce a few days before stuffing the shells.

In a large pot place
4 quarts water
Over high heat bring the water to a boil.
Add
salt to taste
Add
340 grams (about 20) jumbo shells
Cook, stirring occasionally, until the pasta is cooked but slightly chewy.
Drain the shells and rinse with cold water.
Stuff the shells.
If freezing see above.

If the shells are for tonight's dinner, preheat oven 400 º F

Place a layer of tomato sauce in the bottom of a casserole or a 9 x 13 inch pan.
Place the stuffed shells in the casserole.
Add some sauce over the shells.
Bake, covered, 30 minutes.
Top with
1/2 Cup shredded mozzarella cheese
Bake, uncovered, 10 minutes.

Serve with a salad or a cooked vegetable.
It wouldn’t hurt to have some crusty bread on hand to sop up the sauce.
Posted by Margaret Ullrich at 5:37:00 PM