The Full Worm Moon, Easter, and a Planters' Punch Recipe for the Family 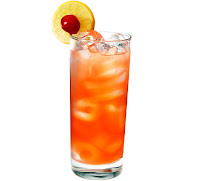 Well, it’s been a bit of an busy time.

A week ago we had Daylight Savings Time.
Sleepy or not, we soldiered on to bake traditional foods to celebrate St. Patrick’s Day, then St. Joseph’s Feast Day.
Yesterday was both the First Day of Spring and Palm Sunday.

That’s right, Easter is this Sunday.
I know, you haven’t finished setting all the clocks in the house and car ahead an hour.
Too bad.

If you’re in the Eastern Orthodox Churches, thanks to the Julian calendar, you can ignore all of the above.
You usually have a bit more time.
Don’t gloat.

If you’re not so lucky, you might be hosting the family Easter dinner this Sunday.
I know, it just gets better and better.

But, since the family is coming, it might be a good idea to have something on hand to, well, smooth over the rough edges.
Like when everyone's favourite uncle comments on the fact that a certain nephew is still living with his parents.
Back in his day, a man that age was a man…
Yeah, family… gotta love it.

Planters' Punch is a simple cocktail made of dark rum, lemon juice, Grenadine syrup and a dash of Angostura bitters.
So it’s quick and easy to make more of  this punch to keep those glasses filled.
This recipe has been around a while.
The September 1878 issue of the London magazine Fun mentioned it.
The recipe is a classic that everyone will most likely enjoy.

In the 1942 spy thriller Across the Pacific Humphrey Bogart and Mary Astor both order a Planter's Punch at a bar in Panama.
The movie's plot was set on the eve of World War II.
If the writer thought a glass or two of Planters' Punch could help Humphrey Bogart get through an oncoming world war, well, who am I to disagree?

Some people also add orange juice and pineapple juice.
The glasses can be garnished with a cocktail cherry and a pineapple slice.

On March 20 we welcomed spring with the Vernal equinox. This marks the change of seasons where the length of daylight hours begin to win out over the length of nighttime hours.

On March 21 the waxing gibbous Moon is very close to the planet Jupiter, which will be just northwest of the Moon.

On March 23 we’ll have the first Full Moon of Spring.
See the video on how March's Full Worm Moon got its name.

On March 25, and for the next two weeks, look to the western sky for the Zodiacal light or “false dawn,” in the early evening.


On March 30 the Moon reaches its southernmost point, sometimes referred to as lunar standstills.