Tourtière Pie with Cheddar Cheese, the Beehive Cluster and the Full Worm Moon by Margaret Ullrich 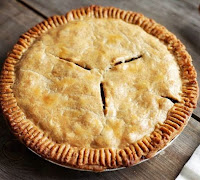 It's March, but it seems that winter isn’t quite ready to leave us just yet.
We’ve had a couple of days of blustery weather, with heavy snow and high winds.
The Trans-Canada Highway was closed for a while, and everyone had to stay where they were for safety’s sake.
Oh, well… it’s March in Manitoba and we're used to getting a few surprises.

I recently posted the recipe for Manitoba Tourtière Pie.
A friend mentioned that her son loved cheeseburgers.
She wondered if cheese could be added to the filling.
Well, why not?

The dough for the crust can be made two days in advance.

Don’t skip chilling the filling. This prevents the crust from becoming soggy.

The dough that is leftover from trimming can be used to make decorations for the pie.
Either roll flat and use cookie cutters or roll the dough into a rope to make spiral decorations.

To freeze an unbaked pie: wrap well and freeze for up to one month.
Defrost in refrigerator for 24 hours, then bake.
For best results, bake pie on bottom oven rack.

In a rush? You can use a package of refrigerated pie crusts. You’ll need two crusts.
But don’t make the pie and freeze for a later meal.
The crust won’t be as good as it could be.

Sprinkle over the flour mixture
4 Tablespoons cold water
Using a fork stir and draw the flour from the bottom of the bowl to the top, distributing the moisture evenly into the flour.
Add more water by the tablespoon until the dough is moist enough to hold together when pressed together.
Divide the dough into two pieces, making one piece slightly larger than the other.
Flatten into 1/2 inch thick disks, and wrap each piece in plastic wrap.
Chill for 30 minutes, or up to 2 days.

Stir into the cooled filling
1 to 1 1/2 Cups shredded Cheddar Cheese, as mild or as strong as you like
Mix well.
Spoon the filling into the prepared pie plate.

Beat together
1 egg
2 teaspoons water
Brush some of the egg mixture over the edges of the pastry in the pie plate.
Place the top layer of pastry over the filling.
Seal the edges, then trim and flute the edges.
Cut steam vents in the upper crust.
Add the extra dough decorations (see hints).

Brush the remaining egg mixture over the top of the pastry, and decorations.
Bake in the preheated oven for 10 minutes.
Leaving the pie in the oven, reduce the heat to 375°F.
Bake for an additional 45 - 50 minutes, until the pastry is golden.

Serve as is or with chili sauce, or ketchup, or chutney.
A cooked vegetable or a salad would also be a nice touch.

Tourtiere Pie, in all its variations - with or without cheese - is a delicious meat pie.
But do try Ma’s Timpana recipe.
Really. It’s great!

March 10 - Although the waxing gibbous Moon will be bright, see if you can spot the star Regulus a mere 3 degrees from it. Regulus is one of the brightest stars in our sky, and is part of the constellation Leo, the Lion.