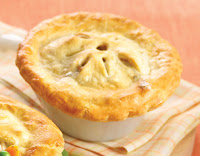 Happy Earth Day!
It’s been a long winter here on the prairies, and we have just gotten into double digit temperatures this past week.
Everything is a bit behind schedule, including the return of our geese.
We’re a bit late seeing greenery, but at least it isn’t a test of endurance to go outdoors.

A few years ago I posted the recipe for the Red Velvet Cake that was served in Eaton’s, a local department store.
Eaton’s was a mainstay of downtown Winnipeg, providing the complete department store experience, plus many delicious meals.
It was torn down and replaced by Bell MTS Place, an indoor arena.
A few people have asked if I had any other Eaton’s recipes.

These recipes are from the book A Store Like No Other: Eaton's of Winnipeg by Russ Gourluck, a book filled with the history of the store and its importance in Winnipeg.
It also had a few surprises.
Apparently Eaton’s Grill Room had a slightly pudgy ghost!

The chapter The tastes of Eaton’s brought back many memories.
The introduction to the Chicken Pot Pie recipe and Asparagus Rolls says that the recipes come directly from food services manager Alan Finnbogason.
In Winnipeg the individual Chicken Pot Pies were served in oval green bowls.
The Asparagus Rolls were served, three on a plate, with a generous serving of Eaton’s own Thousand Islands Dressing in a silver sauce boat.
A meal in Eaton’s was not eaten with plastic cutlery or on paper plates.

Yes, a meal in Eaton’s was a dining experience.
But times change, and some places are just a memory now.

I hope that pudgy ghost is happy in Bell MTS Place.

About the Chicken Pot Pie:
If you have chicken stock you can use 4 Cups of that instead of the water and chicken soup base mixture.

You can also use the puff pastry that can be found in the frozen food section.

These notes weren’t mentioned in the book, but they answer a few questions:
Tuck the crust into the ramekins or casserole and pinch the edges against the sides of the dish.
Place the ramekins on a baking sheet. The casserole doesn't need a baking sheet.
Cover the pie(s) loosely with aluminum foil before placing in the oven.
Check the pie(s) a few minutes before the end of baking time. If the crust isn't browning properly, remove the foil and continue baking.
Bake until the crust is golden brown and crusty: 18-20 minutes if using ramekins, 25 to 30 minutes if using a large casserole.

About the Toasted Asparagus and Cheese Rolls:
Some people add a bit of garlic.
A few people insist that sandwich bread is better than regular bread in this recipe.
In a rush? You can use processed cheese spread and/or canned asparagus.
The rolls can also be served with a spritz of lemon.

Place cooked chicken in 6 ramekins or a large casserole.
Cover with sauce, mix, then top with raw pastry.
Bake at 350º F
Bake until the pastry is browned and the contents are heated thoroughly.

Cut the crusts from one large fresh loaf of bread and cut into 3/4 inch slices.
Place a slice of good quality cheddar cheese, sliced thin, on each slice of bread and place some butter and a fresh asparagus spear in the centre of each slice.
Roll each bread slice and hold it together with a toothpick and place them on a cookie sheet.
Add a bit of melted butter to the top of each slice and place under a broiler for 2 minutes, or until golden brown.
Remove toothpicks and serve with Thousand Islands Dressing.

Hope you enjoyed the Lyrid meteor showers this weekend. Its meteors are often bright. The Lyrid meteor shower has been observed for more than 2,600 years; Chinese records say “stars fell like rain” in the shower of 687 B.C. Quite spectacular displays have also been witnessed at least a dozen times since. These meteors are the dust left behind by Comet Thatcher, which visited the inner solar system in 1861.
If you missed them, don’t fret. They return every April when Earth passes through the dusty tail of the Comet Thatcher, consisting of debris traveling at 110,000 mph, disintegrating as ‘fireball’ streaks of light when they hit the earth’s atmosphere.

April 22 - First Quarter Moon, 5:46 p.m. In this phase, the Moon looks like a half-Moon in the sky. One-half of the Moon is illuminated by direct sunlight while the illuminated part is increasing, on its way toward full.


April 29 - April's Full Pink Moon will be astronomically full at 8:58 p.m. In this phase, the visible Moon is fully illuminated by direct sunlight. Though the Moon is only technically in this phase for a few seconds, it will appear full for about 3 days. This is the first full Moon of the spring season.
Posted by Margaret Ullrich at 4:40:00 PM