Slurpees and Flapper Pie - Summer on the Prairies 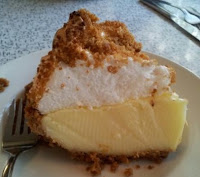 Just a reminder...
Tomorrow is Free Slurpee Day here in Canada!
We Winnipeggers have a reputation to maintain as the Slurpee Capital of Canada and must do our patriotic duty.
As we all know, a brain freeze headache never killed anyone; it just helps to prepare us for our -40º C winters.
And, as we also all know, a slurpee tastes better when it’s free!

Free Slurpee Day is just a fun summer tradition, especially here on the prairies.
Another prairie tradition - great any time of year - is enjoying a slice of Flapper Pie.

Haven’t tasted Flapper Pie? Goodness… you’re in for a treat.
Flapper Pie has a graham cracker crust with a creamy custard filling, topped by a huge meringue and a sprinkling of graham cracker crumbs.
Well, some folks in Saskatchewan top the custard with whipped cream, but they still call it Flapper Pie. It's a free country, after all.
Some prairie women like to guild the lily and add a generous layer of whipped cream on top of the meringue.
As the saying goes: too much of a good thing is just... too much of a good thing!


The recipe became popular when it was on the Paulin’s Graham Wafer box in the 1950s. Paulin’s products were produced here in Winnipeg.

Flapper Pie was made regularly in the winter because homemakers didn’t always have fruit on hand for a filling but they always had eggs, milk, butter and sugar.
Flapper Pie used to be staple at Box Socials and Fall Suppers and could be found on the menus of nearly every small town prairie cafe and restaurant.

For the full experience one should have hamburgers with cooked onions followed by a generous serving of Flapper Pie.
The Salisbury House Restaurant, known for their burgers with fried onions - which they called ‘Nips’ - included it as Wafer Pie on their menus.
Hey, even the folks at Salisbury knew the best recipes come from food boxes.

Another prairie tradition is eating it warm, straight from the oven, for breakfast.
Think of it as a very, very fancy quiche.

This pie is best made the day you serve it, but the crust can be made in advance.

The recipe on the box has the crust unbaked. It’s easier to cut this way.
If you prefer, bake the crust for 8 minutes at 350º F before adding the filling.
Let the pie cool on the counter for 3 hours, then add the meringue and bake.

Not into making custards? Some women have used boxed vanilla pudding.
They would bake the crust for 7 minutes, then let it cool completely in the refrigerator. Then they’d add the custard and meringue or whipped cream topping.

Feeding a crowd? Use a 9 x 13 cake pan with triple the filling and meringue amounts.

If you’d like a stronger cinnamon taste you can add a bit more in the crust and also add 1/4 teaspoon (or more) to the custard.

Do you remember a recipe that used Zwieback crumbs instead of graham cracker crumbs and was served in a deep sided pyrex casserole dish?
That was called a Cream Torte.

In a medium bowl combine
1 1/4 Cups graham cracker crumbs
1/2 Cup sugar
1/2 teaspoon cinnamon
Add the melted butter and combine well.
Setting aside about 3 tablespoons to sprinkle on top of the meringue, pour the remaining crumb mixture into a 10 inch pie plate.
Press the crumbs across the bottom and up the sides of the plate.
Refrigerate or bake 8 minutes at 350º F (see hints).

Combine in a medium saucepan
2 1/2 Cups milk
1/4 Cup sugar
Cook over medium heat, stirring until it just starts to simmer and sugar is dissolved.

Pour the egg / milk mixture back into the saucepan and place it over medium heat.
Whisk constantly until the mixture starts to thicken, then lower temperature slightly.
Continue whisking until the mixture begins to bubble. Cook for 1 1/2 minutes.

Take the saucepan off the heat and whisk until smooth.
Whisk in
2 teaspoons vanilla
Pour the hot custard into the cooled crust and and spread over the crust.
Allow the pie to chill in the fridge at least an hour.

For the Meringue Topping

Pour the filling into the crust and cover with the meringue, making sure to reach the crust edges. Don’t smooth it - you want the pointy bits so that they will get extra brown when it’s in the oven.

Sprinkle the remaining crumbs over the top of the meringue and slide into the oven.
Bake until the meringue browns, about 5 minutes. Keep an eye on it - ovens vary.
Remove and serve immediately.


Slice with a sharp chef’s knife that has been dipped into hot water and dried.
Posted by Margaret Ullrich at 7:11:00 AM