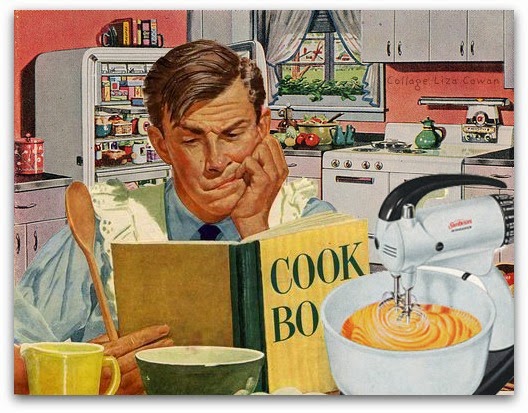 Some folks have asked me why I've been writing about Pop in this blog.
'Turning 60' is mostly about food and recipes.
Wasn't that Ma's domain?

When we moved to College Point in 1952, Ma also worked at Lily Tulip.
For the 50s, she was a woman ahead of her time.
Ma worked the day shift and did quality control.
Translation: she'd pick cartons of paper cups, at random, then count the cups
to make sure the box held as many cups as it was supposed to have.
Okay, it wasn't brain surgery, but it helped pay the mortgage.

Pop worked the night shift at Lily Tulip as a pipe fitter's assistant.
Translation: he helped with repairs and kept an eye on gauges.
It was the same work he'd done in Malta.
So much for making a big life change in the new country.

During the day Pop tried to catch some sleep.
He also had to upgrade the ancient fixer-upper house he'd bought.
Oh, and he also was supposed to be keeping an eye on me.

I was a preschooler.
I hated taking naps.
Pop's solution was to park me in front of the TV set.
He was stretched out on the couch and trying to get some sleep.
Quality time.

Pop followed the recipes that came with the mixer exactly.
He actually baked a few good cakes.
Ma was impressed.

Then it was late November.
Pop saw a recipe for fruitcake in the New York Daily News.
The recipe didn't mention using a mixer.
But Pop thought it couldn't hurt.

Fruitcake batter is not like regular cake batter.
The beaters came to a dead stop.
No problem.
Pop cranked the mixer up to speed level 2.
The beaters barely moved in the sludge.

Pop then added another cup of booze.
Why wait until it's aging when it needed some liquid help now?
Pop thought he'd create a new, improved recipe.
Maybe he'd share it with the New York Daily News.

He also cranked the mixer up to speed level 3.
Even at level 3, the beaters could only do so much.
Pop grabbed a knife to help move things along.

At first he stayed close to the bowl.
Then he tried to help the beaters mix the gunk.
While the beaters were turning.

The knife got twisted and bent into a curlique.
It was woven between the beaters' tines.
No way could it get untwisted.
Or removed.

Without saying a word, Pop scraped the batter from the bowl and baked it.
The fruitcake needed a little extra time to bake off the extra liquid.
By the time Ma came home, the mixer was out of sight.
It had gotten shoved to the back of a cabinet.

After the Fruitcake Incident, Pop went back to the basics.
Big wooden spoons.
No one mentioned The Mixer.

At Christmas, the fruitcake was pretty good.
But, it was a while before Pop believed another TV commercial.