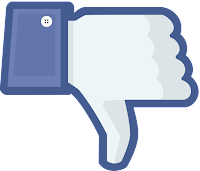 This has not been a good week for Facebook.

I had gotten an email: a senior citizen friend wanted me to see a Lady GaGa video.
I had to be over 18 to see it.
That part was easy.
But, one thing about being over 60 is you know your friends don't bother with things made for people over 18.
I didn't look at the video.
I mean, what could it possible show me that I haven't seen before?

Within 24 hours I got a note from another old friend.
You've got it - she wanted me to see Lady GaGa.

Okay... she'd been hacked.
I changed my password.
Again.

I flashed on 9/11.
When the first plane hit, it had to be an accident.
When the second plane hit, we knew something was going on.

On November 15, another friend posted a link to The Washington Post.
There had been a Facebook security breach.
Big Time.

Why do hackers do this?
Some want access to our private info.
Private info is handy for identity theft.
Other hackers have said that they wanted to "take down Facebook".
Seeing your family's pictures is just an extra treat for them.

Daimon Geopfert, a security expert, said this was one of the largest Facebook attacks he's seen. The scale and speed were “unprecedented”.

Experts said it was easy to imagine another attack on Facebook that would be worse:
sending false messages to lure family and friends to malicious sites, where they might be tricked into revealing private information.
So much for user safety and privacy.

Many Facebook users twittered that they were thinking about shutting down their accounts.
Facebook responded by saying it was working to shut down the accounts responsible for the attack.
Facebook is a little busy right now.
It's near a settlement with the Federal Trade Commission over complaints about the way it stores and shares user data.
Not exactly reassuring.

And me?
I'm deleting some "friends" I had accepted in more innocent days.
These friends most likely are nice people.
But, some of them have over 1000 friends.
How well could they know all of them?
And one of the 1000 could hack into my overly friendly friend's friends.
Like me.
Again.

I'm also going back to using e mails more.
I can handle the notes from Nigerian princesses.
The notes about needing my help to transfer $1,000,000.
It's easy to delete them.

And they can't see my family's pictures.