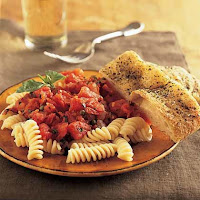 Back in February I posted the recipe for Carmela's Deluxe Tomato Sauce.

Her Sunday Gravy is a fantastic recipe.
It has veal, pork sausages and tiny meatballs.
Something for everybody.
Not something you'd throw together at the last minute.
But worth the effort.

But, let's be honest, most of the time there isn't the time for the effort.
But the family wants dinner.
And the spaghetti looks kind of sad naked like that.

Back to The Sopranos Family Cookbook by Artie Buco...

The chapter Cooking in the Neopolitan Way has another recipe for Tomato Sauce.
It's really easy.
And perfect for this time of year.
Especially if you have plum tomatoes in your garden.
This recipe can use 2 pounds very ripe plum tomatoes.
Just peel, seed and chop them.
Or not.
Or use a 28 ounce can of Italian tomatoes.

If you're having company, and I hope you are, double the ingredients.
It's an easy recipe.
And you don't want to look cheap.
I mean, bad enough, there's no meat in this recipe.

On the page facing  the recipe there was a lovely thought:
relax, sit down, serve yourself a little pasta, and taste life.

Add
2 pounds prepared ripe plum tomatoes or a 28 ounce can of tomatoes, drained
salt to taste
Bring to a simmer and cook, stirring often, 15 to 20 minutes, until thickened.

Stir in
8 to 10 fresh basil leaves, torn into pieces
Serve over hot cooked spaghetti or your favorite pasta.

Would I make Marinara Sauce again?
Sure.
And I'd triple the recipe.
Sauces, like stews, are better the next day.
And I'd broil some chicken.

One recipe down.  Eighty-five more to go.