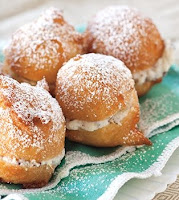 In Entertaining with The Sopranos there was a recipe for Sfingi, also called St. Joseph's Day Zeppole.
Carmela Soprano called it Sfingi, Anna Sultana called it Zfineg. For St. Joseph, the Sopranos and the Sultanas are one.

Sfingi / Zfineg is a tiny ball of puff pastry, fried like a doughnut ball, split open and stuffed with a ricotta and candied citron filling.
The filling is strictly for St. Joseph's Day.

Sfingi / Zfineg has a lot of Mediterranean mojo attached to it.
As it was explained:
If it is not St. Joseph's Day, you can just shake these, without the filling,
in a bag with cinnamon sugar and serve them like donuts.

Religion doesn't have to make sense.
It just has to follow the rules and be done right.
Even for Tony and the boys, some things are sacred.

Maybe in Tony's line of work, only a lucky few turned 60.
For those of us who have, well, some old favourites can cause problems.
Cream Puffs are baked and they can be stuffed with the ricotta filling.

If there's someone in the crowd who is lactose intolerant, Bobby's recipe for Zeppole in his chapter If I Couldn't Eat, I'd F**king Die in Artie Bucco's The Sopranos Family Cookbook would at least show you cared.
And St. Joseph would understand.

Hint:
Proof means you let the yeast sit to see if the liquid gets foamy.
If, after 10 minutes the liquid has no foam, the yeast has died.
It will not work.  You've been warned.

If you don't have a deep-frying thermometer, test the oil by slipping a bit of the dough into the oil.  It should sizzle and turn brown in 1 minute.

In a bowl sift together
2 Cups flour
1 teaspoon salt

In a deep saucepan or deep fryer pour
about 2 inches vegetable oil
Heat to 375º on a deep-fry thermometer or test with dough.

Drop the dough by tablespoons into the hot oil.
Don't crowd or they won't fry properly.
Cook, stirring a couple of times, about 2 minutes,
until they are crisp and golden.
Remove the zeppole with a slotted spoon.
Drain on paper towels.
Repeat with the remaining dough.
Put the zeppole in a paper bag.
Add
1/2 Cup confectioners' sugar
Shake the zeppole until coated.
Serve immediately.

Would I make Zeppole again?
Sure, one can't hurt.
Everything in moderation.
Including moderation.

One recipe down.  Thirty-two more to go.