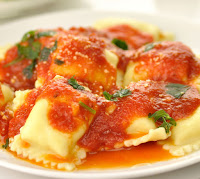 And sometimes recipes aren't.
Artie's Ravioli alla Bucco, in his chapter Mia Cucina in The Sopranos Family Cookbook,
is one that takes a bit of time.

Ravioli, like pyrogies, is basically dumplings.
Making things like ravioli can be a sociable event.
Our parish, which has a Polish base, has pyrogy making days.
Especially before Christmas and Easter.
It's a fundraiser for the parish and a nice way for old friends to spend a day.

Artie's ravioli recipe has a bit of meat in it.
My Ma's ravjul is meatless, and easier to make.
Especially if you don't have a pasta machine.
She often served it as a first course.
No, we weren't vegetarians.
It was just Ma's way of cutting our appetites.

Want an appetizer?
Small, deep-fried ravjuletti are popular in Malta as an appetizer.
They're a little different from the regular ravjul.
But a handy recipe to know when holidays are coming up.
Like Easter…

Hints:
If the dough tears, dust it with flour, fold it and pass it through the machine again.
After you've placed the ravioli on the baking sheets, you can freeze them until firm,
then place them in a heavy duty plastic bag, seal and freeze them up to one month.
Do not thaw before cooking.

When cooking the ravioli, just put in enough to fit comfortably.
Don't crowd or they'll stick together, even worse than spaghetti would.

Gradually add
2 1/2 Cups flour
Mix until the dough forms a moist, but not sticky, ball.
Add more flour if needed.
Place the dough on a lightly floured surface.
Knead for 1 minute, or until it is firm and smooth.
Shape the dough into a ball, cover with the bowl, and let rest 30 minutes.

Cut the dough into 8 pieces.
Put 7 of the pieces back under the bowl.
Shape 1 piece of dough into a flat disk.

Lay the strip of dough on a lightly floured surface.
Mark the lengthwise centre so you don't overfill it.
About 1 inch from a short end place the filling, in a straight row,
a teaspoonful at a time, about 1 inch apart.
Lightly brush around the mounds of filling with cool water.
Turn the unfilled half of the dough over the filled half, covering the filling.
After moistening your fingers, press out any air bubbles and seal the edges.
Cut between each ravioli with a pastry cutter or a sharp knife.
Separate the ravioli and press the edges with a fork to seal each one.
Place the ravioli in a single layer on the prepared baking sheets.
Cover the ravioli with a towel and refrigerate until needed, up to 3 hours.
They need to be turned a few times so they won't stick to the towels.

Repeat with the remaining dough and filling.

In a large pot place
4 quarts water
Bring to a boil, then lower the heat to a gentle boil.
Add
salt to taste
ravioli

Cook the ravioli, stirring occasionally, for 2 to 5 minutes,
depending on their thickness and if they were frozen.
With a slotted spoon scoop the ravioli out of the pot and drain well.
Place the ravioli in the prepared heated serving bowl.

Would I make Ravioli alla Bucco again?
No, I'd rather make Ma's Ravjul.
Especially if it's a holiday meal.
It just wouldn't be a family meal without Ma's recipe.

I just wish we could sit and make them together again.

One recipe down.  Thirty-four more to go.