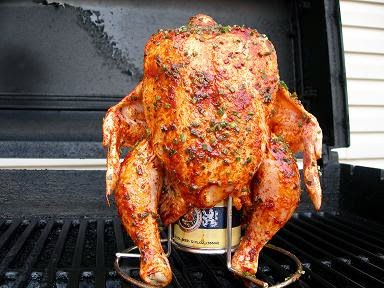 A couple of weeks ago I wrote about Father's Day.  It was about how Dads have changed since the 1950s.

I also talked a bit about Dads barbecuing…
Speaking of the kitchen, a Dad's cooking used to be basic.  Raw meat plus fire produced small hard hockey pucks served with ketchup and relish in a bun.  Raw onion slices were added for the July first weekend.  Up to now the most exciting thing I'd ever seen a man do at that holiday's barbecue was to stick a can of beer up a chicken's butt so it could stand and roast.  It looked almost patriotic.

I got a few e mails about that patriotic chicken with the beer in its butt.
No, I didn't make that recipe up.
Yes, it really is a recipe.
A very simple recipe.

Yes, I'm sorry I didn't post it before Father's Day.
But you can still make it for July 1st or 4th or whatever your national holiday is.
After the chicken is cooked you can put a small flag in one of its wings.
Or not.

About drinking the beer…
If you'd rather not drink it, pour half into a cup.
Flat beer is also good as a hair conditioner.
That's what we did with leftover flat beer in the 1960s.
But it does seem like a waste when beer is not left over from a party.

About the beer left in the can after cooking...
It's gotten a bit nasty with chicken grease and stuff dripping into it.
Toss it.

About the rub...
The spices are just a suggestion.
If you've got a family recipe or a jar of something you got on sale, use it.

Beer Can in Chicken's Butt

Preheat barbecue for a medium-high heat.

Remove giblets and the neck from
1 whole chicken (about 4 pounds)
Do not truss the bird.
Smear the rub all over the chicken.

Open
1 (355 ml) can of beer
Drink half of it (or not)
Punch a few extra holes in the can so the steam can escape during cooking.

Turn off the burners directly below the chicken.
Cover the grill and cook over indirect heat for 1 hour.

Remove the chicken from the grill and tent the standing chicken with foil.
Let it stand 10 minutes so the juices will settle, just like a regular roasted chicken.
Remove the can and place the chicken on a platter.
Carve and serve.