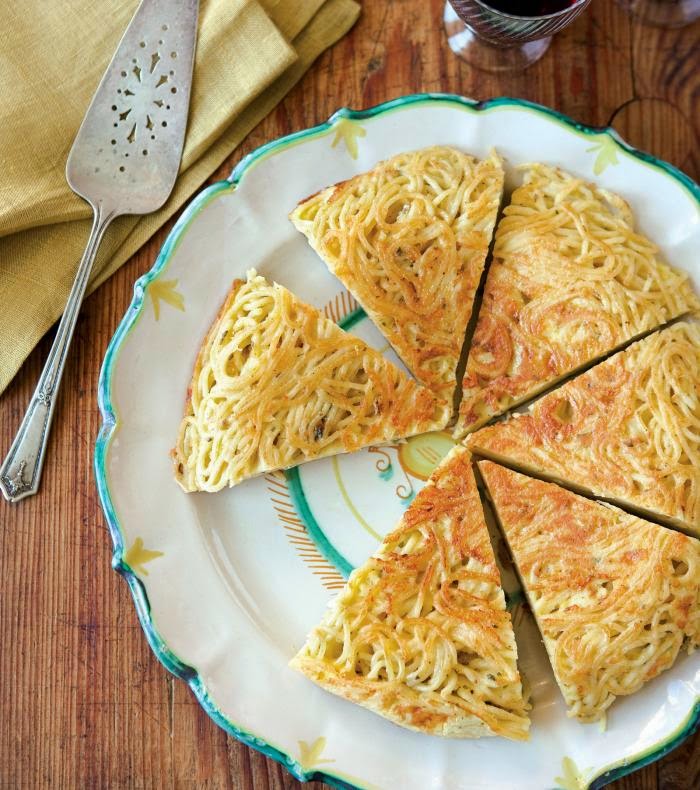 In addition to Barbuljata, Ma had another quickie egg meal.
Froġa tat-Tarja, Spaghetti Omelette.
It takes a little longer, but not much.

Apparently Spaghetti Omelette is popular in Italy, too.
Back in 2010, when I started comparing Carmela Soprano's recipes to Ma's recipes,
I posted about Carmela's Spaghetti Pie.
It's similar to Ma's recipe, but it is a bit more complicated.
And more expensive.

Ma's recipe is healthier, too.
And that's a good thing.

Hints:
Vermicelli is the traditional pasta used.
But, if you have spaghetti or spaghettini, no problem.
Just adjust the boiling time for the pasta.

Dried parsley can be used instead of fresh.
Don't worry about the salt and pepper.
Folks can spice it up at the table, too.
You can also add odd bits of ham, veggies etc.
It's all good.

Before cooking find a plate or pizza pan that can cover the surface of the frying pan.
When the eggs have set you'll cover the pan and flip the omelette onto the plate.
Then you'll slide it back into the frying pan so the other side can brown a bit.
If that worries you, no problem.
Just cut into the pie with a large, heat-proof spatula and turn over the sections.

In a large pot place
4 quarts water
salt to taste
Bring to a boil.
Add
400 grams (about 1 pound) vermicelli
Cook, stirring frequently, until the pasta is al dente.
Drain the pasta well and place it in a large bowl.

Heat in an omelette pan over medium high heat
1 Tablespoon olive oil
Pour the pasta into the pan.
When it has set, turn the Froġa and cook the other side until it is lightly browned.
Serve immediately with a sprinkling of parsley.