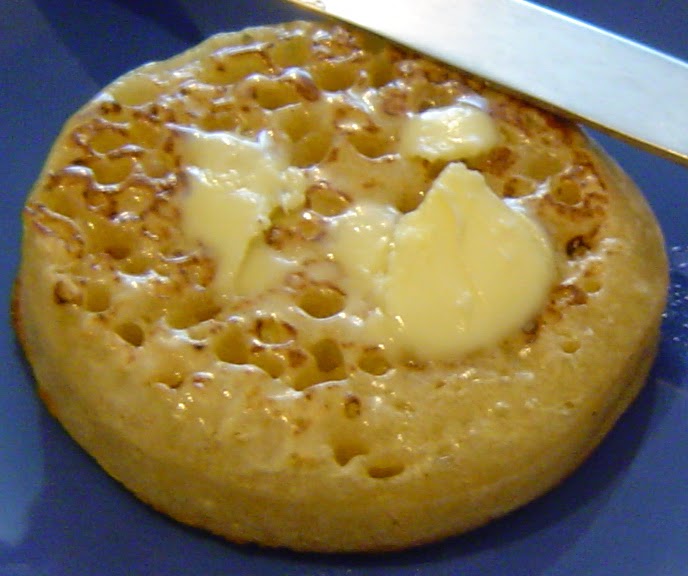 Prince Charles and Camilla are in Winnipeg!
The couple arrived last night under cloudy skies, light rain and a strong wind.
Today Prince Charles will go to the zoo and feed a polar bear.
Camilla will tour the Royal Winnipeg Ballet.
After attending a more formal event tonight they’ll head home.

It’s a damp, unpleasant day here today.
Time to get cozy with a pot of tea and a crumpet.

Crumpets are the perfect afternoon tea treat, served warm with lots of butter, or jam for an extra special treat.

When I was a kid, my family and I lived in a German / Irish town.
Crumpets weren’t a hot seller in College Point.
Ma always kept a few well-washed tuna tins for making crumpets.
Sometimes she just wanted a crumpet and nothing else would do.

Just to be clear - remove top and bottom lids and the labels of the tuna tins.
Give them a really good scrub.

If you want to check the temperature of the liquids, warm means about 115º F.

If the batter seeps from under the ring it is too thin, beat in more flour.
If the crumpet is heavy and without holes, the batter is too thick, add more water.

Beat the milk mixture into the dry ingredients until batter is thick and smooth.
Cover with a towel and let rise in a warm place until spongy, about 1 hour.
Stir dough to reduce sponginess.

Place the rack in the middle of the oven.
Preheat oven 150º F
Grease an ovenproof skillet and 4 tuna tins.
Place the tins in the skillet and preheat them in the oven about 10 minutes.
Remove the skillet from the oven and spoon batter into the tins, filling them about halfway.
Let the crumpets cook until the bottoms are browned, the tops appear nearly dry, and popped bubbles appear on top, about 5 minutes.

Use tongs to lift the tins out of the pan.
Remove the tins from the crumpets.
Flip and return crumpets to skillet to cook the other side 1 minutes.
Keep cooked crumpets warm on rack.
Repeat with remaining dough.

Maybe Prince Charles will feed a crumpet to Hudson, one of the polar bears at the zoo.
Posted by Margaret Ullrich at 9:43:00 AM