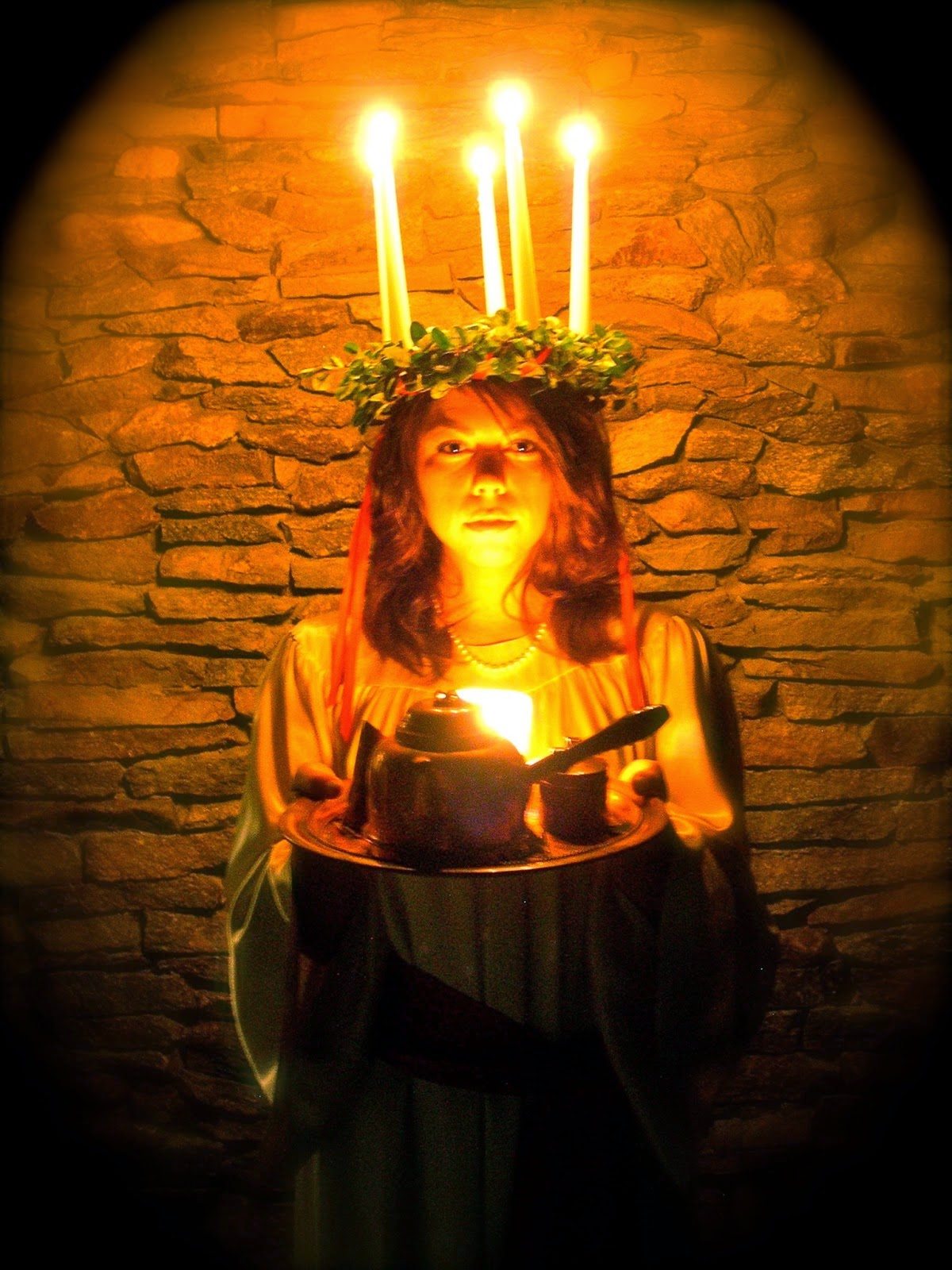 Back in 2000 I wrote this for the CKUW radio show ‘2000 & Counting’.
No, I don’t do any of these seasonal feast celebrations anymore.
At my age I have to conserve my energy for Christmas!

As far as I'm concerned, there are two questions no one should ever ask a woman.  The first is How old are you?  The second is Have you done your holiday baking yet?  Why is it that, when the thermometer falls, we're supposed to bake?  Does the Queen whip up a fruitcake before writing her speech?  I don't think so.
I've always been curious about holiday recipes.  I've done some research.  Ginger was popular in Greece over 5000 years ago.  The Egyptians were eating gingerbread when the great pyramid of Cheops was just a brick and a prayer.  A few years after Egypt's building boom, an English King and his hunting party got lost in a blizzard on Christmas Eve.  Well, they were clever lads, so they threw everything they had - meat, flour, sugar, apples, ale and brandy - into a bag and cooked it.  Wallah!!  Plum pudding.  The Iron Chef would've been proud.

On Christmas Day in 1666, Samuel Pepys wrote in his diary that he had risen earlier than his wife who was desirous to sleep having sat up till four this morning seeing her maids make mince pies.  I really admire Mrs. P.  She just sat and watched the maids do the work, yet her husband felt guilty about her workload.  How did she do it?

Some Christmas carols seem a little too focused on food.  For example:
Now bring us some figgy pudding and a cup of good cheer!
We won't go until we get some, so bring it out here.
Those were somebody's friends?  Somebody should've called the cops.

Traditional holiday baking is just fine if every woman stays in her own country and knows what to do.  Baking on a leveled cookie sheet, so to speak.  But, it can be a problem for folks just off the boat.

My parents and I immigrated to New York in 1950.  A few years later, when I was in school, I asked why we didn't have anything pretty to eat for Christmas.  My Ma told me that in Malta, Christmas was a religious celebration.  The focus was on God becoming man, not on cookies.

Maltese desserts are simple, usually fresh fruit and cheese with an occasional cookie such as biskuttini tar rahal.  Another favourite is the anise biscotti.  The big thrill with a biscotti is seeing how much milk it can suck up before breaking in half and falling into your glass.  It's like eating the sinking Titanic.  For the holidays, we borrow from the Sicilians and make kannoli tar-rikotta or a qassata.

I knew my German friends ended their meals with more oomph.  Our parish, St. Fidelis, was a cookie heaven.  The most amazing homemade cookies were brought to every church and school function by my friends' Moms.  They were rich and gorgeous - the cookies, I mean.  They were loaded with spices, fruits, nuts and jams.  They were covered with thick layers of frosting and all sorts of sprinkles.  When my Ma saw the competition she admitted defeat and took over the job of bringing coffee.  I was free to eat whatever caught my eye.  While I gushed, my friends' Moms all beamed.  My friends thought I was nuttier than the cookies.
My husband is a third generation American - half Swedish and half German.  Okay, I was marrying into the Cookie Big Leagues.  I thought, along with the change of name, I'd return from my honeymoon a changed woman able to make cookies with a capital C.  To paraphrase the biblical story of Ruth, I believed, What thou eatest, I will eat.  Thy cookies shall be my cookies.

Thanks to the movie The Sound of Music, I just knew we'd celebrate Christmas a la von Trapp: sitting beneath a huge, glowing tree, singing Edelweiss and munching beautiful cookies, my favourite things.

There's an old German saying: That which really tastes oft us trouble makes.  Now, there's truth in advertising.  Clear as a bell, they were warning me to not even go there.  If I'd had half a brain I'd have just thrown in the mixing bowl and placed a huge order at the local German bakery for a deluxe assorted cookie platter, with some stollen on the side.

Nope, I didn't take the hint.  I studied every German and Swedish cookbook I could find.  The biggest surprise was that there were other days that had to be celebrated.  Ok, I thought, practice makes perfect.  Maybe it's like opening a Broadway show in Boston.

According to one big fat book, a good Swedish wife got up at four a.m. to start tossing her cookies.  God forbid any sunlight should shine on the dough or disaster would befall the household.  Every hefty housefrau hoped a crescent moon was hovering on the horizon to bring good luck to the baking.  No kidding.  Without that sliver of light she could get killed, stumbling around in the dark like that.  I really thought that if I followed the customs, my baking would get better.  I got up at four a.m. and baked.  Okay, I cheated.  I used electric lights.

The first Advent biggie was December 6, St. Nicholas' Day.  Small presents in Paul's shoes and some hot chocolate and buns for breakfast.  No problem.  Huzzah!!  One day I'd bake cookies that looked like jewels!  I spent more nights baking instead of sleeping.

Maybe the lack of sleep was affecting my mind.  My next goal was an authentic Swedish Saint Lucia Day for our first December 13th.  I stitched up a long white robe and tied shining red balls to our Advent wreath.  Then I ran into a slight problem.  Saffron buns and coffee were served between three and four a.m. by the eldest daughter, who was dressed as the Lucia Queen.  We didn't have children and I couldn't borrow a neighbour's kid for that ungodly hour.  So, I became the first Maltese Lucia Queen in history.  I memorized the traditional poem.

Then, when I saw how much saffron cost, I made another teeny change.  I made cinnamon buns.   What harm could it do?
The days flew.  It was December 13th.  I was clad in white, balancing the advent wreath with bouncing red balls and gleaming white candles upon my head.  Three a.m.  Show Time!  I was a glowing, flaming, cherries jubilee, clutching a tray laden with coffee and cinnamon buns and walking ever so slowly to our bed.

Hovering over Paul, I began chanting: Night goes with silent steps…
Hmmph… He was snoring.  No Swedish genes were making him wake up to behold his Lucia Queen.  Well, after all that work, the Lucia Queen required an audience.
Wake up, Paul.
Still no answer.  I set the tray down, gave him a shove that nearly pushed him out of bed and repeated: Night goes with silent steps… Damn it!  Wake up!!

He snorted, turned and faced me.  It took him a while to focus.  Okay, finally, I, the Lucia Queen, was getting the respect I deserved.  I went back to chanting.
Night goes with silent steps round house and cottage.
O'er earth that sun forgot, Dark shadows linger.
Then on our threshold stands white clad in candlelight,
Santa Lucia, Santa Lucia.
He looked.  He blinked.  He screamed.  He said something that no one should say to a Lucia Queen.

I blamed the cinnamon.  Maybe the Swedish mojo just doesn't work if one substitutes cinnamon for saffron.

About Saturday’s full moon in Gemini…
It’s also called “Oak Moon", "Cold Moon" and "Long Night’s Moon”.
The winter cold fastens its grip, and nights are at their longest and darkest.


Long Night’s Moon is an appropriate name because the midwinter night is indeed long, and because the Moon is above the horizon for a long time. The midwinter full Moon has a high trajectory across the sky because it is opposite a low Sun.

This information-filled day brings you plenty of ideas, along with supportive people to help you implement them! It seems everybody has something to say right now -- and they're saying it loudly!

The more generous, friendly, and optimistic you are, the better your chances of attracting the attention you need to be successful. This is no time to be a wallflower, so get out there and show people who you are and what you can do!

This full Moon leaves you scattered, busy, and indecisive, but never bored!

Yep, that sounds about right for a Saturday in December!
Posted by Margaret Ullrich at 7:52:00 AM