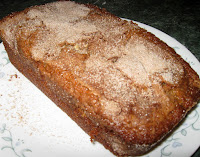 A little over a year ago I posted the recipe for Ma’s Apple Cinnamon Bread.

That post also has links for the recipe for Ma’s Pineapple Cake with Coconut Pecan Topping, as well as her Cinnamon Swirl Sour Cream Coffee Cake and Apple Pie Spice Blend.

The cakes are festive enough to serve with any meal for a holiday gathering of family or friends.
But sometimes a meal calls for something a bit lighter and simpler.
And, during the holiday rush, a simpler recipe may be all we have the time to bake.

This recipe works just as well if you’d rather use nutmeg or allspice instead of the cinnamon. Or you can use an equal amount of Apple Pie Spice Blend.

Instead of the cup of butter you can use
!/2 Cup margarine
3 ounces oil

Don’t have 2 Cups buttermilk?
You can combine
2 Tablespoons vinegar or lemon juice with enough milk to make 2 Cups.
Stir and let sit 5 minutes.

For the Cinnamon Topping
In a small bowl mix together
2/3 Cup sugar
1 Tablespoon cinnamon
Set aside.

In a large mixer bowl, beat at medium speed
1 Cup butter
2 Cups sugar
Beat until the mixture is light and fluffy, about 3 minutes.

Add, one at a time
2 large eggs
Scraping the bowl, beat until just blended.

Spread one quarter of the batter in each of the two prepared loaf pans.
Sprinkle one quarter of the cinnamon topping over the batter in each pan.
Spread the remaining batter evenly over the cinnamon topping.
Using a knife, swirl the batter.
Top with the remaining sugar cinnamon mixture.
Bake for 45 - 50 minutes.
A toothpick inserted into the centre of the loaves should come out clean.
Place the pans on a wire rack.
Let them cool for 20 minutes.
Remove the bread from the pans and place the loaves on the rack.
Let the loaves cool completely.
Posted by Margaret Ullrich at 5:21:00 PM