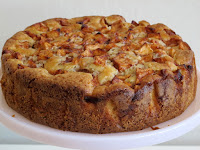 The stores have been having sales on apples.
Huge bags of almost every variety.
Why not pick up a bag or two?

Even if the gang doesn’t want an apple a day - and why should’t they?  Haven’t they heard “An apple a day keeps the doctor away.” - apples are great baked in desserts.

Ma had a real quickie apple cake.
Her pal Josie gave her the recipe.
So Ma called it ‘Josie’s Apple Cake’.
And we enjoyed it every time Ma made it.

Ma used macintoshes because they were usually on sale.
This also works well with Gala or Fuji or Honey Crisp apples.
Or whatever your grocer has on sale this week.
Never met an apple I didn’t like!

When you add the apple slices to the mixer bowl, give the mixture a stir every so often to coat the slices.
This will help keep them from turning brown.

In another bowl combine
2 Cups flour
2 teaspoons baking powder
Place the rack in the middle of the oven.
Preheat oven to 350°F

Peel, core, and slice
6 medium apples
Add the apple slices to the large mixer bowl (see hints).
Add the flour / baking powder mixture.
With a fork, mix well until all of the flour is absorbed by the wet ingredients.
Turn the batter into the prepared pan or pans, spreading evenly.
Top with the cinnamon / sugar mixture.

Bake at 350°F for 55 minutes.
A skewer inserted in the centre should come out clean.
Cool cake in pan before serving.

Have leftover Ritz crackers after a holiday gathering?
They can be used to make a Mock Apple Pie.
Really.
Waste not, want not!

December 11 to 13 – Get ready for the annual Geminid Meteor Showers!
They are visible all weekend and they’ll peak on December 13.  They’re considered the best meteor showers of the year.
The radiant — that spot in the sky where the meteors will appear to emanate — lies just below and to the right of the bright star Castor in the constellation Gemini (hence the name, “Geminids”).  Best viewing after midnight until dawn.

December 11 – New Moon at  5:29 a.m. It is completely invisible to the naked eye.
No loss. Enjoy the meteor shower!