Aging, Exercise, Super Foods and a Blue Moon This Weekend 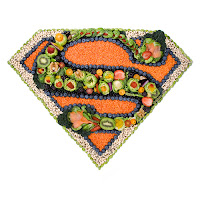 So, I’ve been 66 for almost three weeks.
It’s had its good days and its bad days.
Yeah, that’s life at any age.

I’m not as defensive about being a senior as I was when I turned 63.
That year, 2013, I read the book Feng Shui Your Life by Tisha Morris.
Did I notice any big changes in my life after I purged my house, moved some stuff around, and bought some New-Age stuff?
No.

The next year, 2014, I read through, but didn't do any of the things in, Robyn Okrant’s book Living Oprah.
Let’s just say what works for Oprah doesn’t work for me.

A few weeks ago I read Counterclockwise: my year of hypnosis, hormones, dark chocolate, and other adventures in the world of anti-aging by Lauren Kessler.
Lauren looked into everything that’s available to avoid aging.
What got to me is that Lauren is just in midlife - in hindsight, the great years.
In other words, young enough to be my daughter.
God knows what she’ll try out when she becomes a senior.

Big surprise! Lauren found out that it pretty much boils down to diet and exercise.
Ditch the junk food you loved when you were a teenager.
Get off the couch, in other words, use it or lose it.

Paul and I do exercise - weight lifting, long walks and zumba.
Last Monday we went to a yoga class, my first since I took yoga in college.
Let's just say I'm not 19 any more.
But the teacher was encouraging - she kept saying “Very good” when we didn’t fall - so we’ll continue doing yoga.

The yoga class was a bit of a reminder that we’re not kids any more.
The Saturday before we had gone to a a self defence class.
I think surpising the teacher with the loudness of my ‘scare away the mugger’ yell and my clawing Paul's hand (yes, I drew blood) made me feel like I could handle anything.
Well, that passed after the yoga.

About the food in Lauren’s book…
There are some super foods that give us more bang for our buck.
I’d read about them on other nutrition lists.
And most of them are delicious and easy to add to regular meals.

These are the foods that appeared on most of the lists:
Beets
Dark chocolate (within limits)
Garlic, onions, leeks and shallots
Kale
Legumes (beans, lentils, split peas, etc.)
Prunes

Foods that showed up on many, but not all, lists are:
Almonds and walnuts
Avocados
Berries and red fruits, like pomegranates and red grapes
Broccoli
Cabbage
Cranberries
Flaxseed
Green tea
Extra-virgin olive oil
Oranges
Pumpkin
Quinoa
Red bell peppers
Salmon and other omega-3-rich fish such as trout, arctic char, sardines and herring
Spinach

There are also super spices:
One teaspoon of cinnamon has as many antioxidants as a serving of blueberries.
Cayenne or ground red pepper contain capsaicin, another antioxidant which is also thought to boost the metabolism.
Allspice, oregano, cloves, sage and ginger are also packed full of antioxidants.

So, it’s time to tweak our diets.
The garlic, onions, legumes, fruit, pumpkin, vegetables, fish and olive oil will be easy.
The quinoa and flaxseed will be something new.
Dark chocolate, in moderation, will be fun to add.
Got to keep up our strength for yoga and zumba!

About the sky this week…

On May 21 there will be a full moon - the Full Flower Moon to be exact.
It will also be a “Blue Moon”!
No, you didn’t miss one a few weeks ago. Bear with me…
Each of the four seasons has three full Moons.
Spring runs from March 20 to June 20, with full moons this year on March 23, April 22, May 21 and June 20.
That’s right… that last full moon also falls on the same day as the summer solstice, but it is not the first full moon of summer.
Because - and apparently this is important to some people - the moon turns full at 7:03 a.m. EDT, which is eleven and a half hours before the actual start of summer it is a Spring full moon.
So, this Saturday’s Moon, the third of the four full moons of spring, is a “Blue Moon”.

About that phrase “Blue Moon”…
It might be from the  word belewe from the Old English. Belewe means “to betray.”
So the moon was belewe because it betrayed the idea of one full moon per month.
It’s amazing how personally people take some of the things that happen in the sky.

Mars, in Scorpio, will come to opposition on May 22, rising at sunset, crossing the meridian in the middle of the night, and setting at sunrise. It will be in the upper right of the red first star, Antares, who’s name comes from the Greek meaning “Rival of Mars”.

Gardening?
Plant flowers and vegetables that bear crops below ground during the waning moon, from the day the Moon is full to the day it is new.
Posted by Margaret Ullrich at 5:50:00 PM