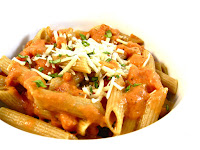 A few years ago I posted the recipe for Penne alla Vodka from Artie's chapter Mia Cucina in The Sopranos Family Cookbook.
It’s become a popular post.
What’s not to love…
pasta, tomatoes, cream, vodka.
And prosciutto.

Got an email asking if there’s a meatless version of the recipe.
Of course there is.
If you were reading any of the posts where I compared Carmela’s recipes to my Ma’s versions, you’ll remember that Ma usually had a healthier, lower cholesterol version of many of Carmela’s recipes.

And, of course, Ma had a healthier, meatless version of Penne alla Vodka.
it’s delicious, and perfect to make when you’ve invited a vegetarian, or two.

You can use either penne lisce (smooth) or penne rigate (ridged).
You can also use pennoni (big quills), a wider version of penne, or mostaccioli (little moustache) which also comes with either smooth or ridged sides.
The hollow centre and the ridges on penne rigate and on mostaccioli help to hold even more of the sauce.

Don’t have any kind of penne in the house?
Want a little variety?
You can use other types of pasta.
Choose something that has a bit of heft to it.
Yes to rigatoni or fettucinni, no to angel hair pasta or spaghettini.

Want more of a kick?
Use some more vodka instead of the tomato liquid to thin the sauce.

Drain, but save the liquid from
1 large can Italian tomatoes, chopped

In a dutch oven melt over medium heat
3 Tablespoons butter

Add to the water boiling in the dutch oven
1 pound penne
Cook, stirring frequently, until the pasta is al dente.
Drain well.
Add the pasta to the sauce and toss.
If the sauce is too thick add some of the liquid from the canned tomatoes.