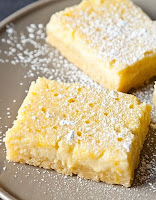 The dinner menu - turkey, ham, lamb or beef - will take care of the family later in the day.
But you can’t exactly let them starve until then.
Sure… you could pull out a few boxes of cereal, just like any other morning.
But you know they’ll give you ‘THE LOOK’.

Funny the things the kids learn from us.

Okay… you’ve been through enough, what with the Spring cleaning and holiday baking.
You don’t deserve getting ‘THE LOOK’.
This Brunch Cheesecake is easy to make but looks impressive.
It can be prepared on Saturday and allowed to sit in the refrigerator, ready to wow them on Sunday morning.

Don’t have lemon zest?  Add another tablespoon of lemon juice.

Want something with a top crust?
Spread 1/3 of the batter onto the bottom of the prepared pan.
Cover with the cream cheese mixture.
Cover with spoonfuls of the remaining batter.
Bake as you would for the original recipe.

Leftover cheesecake is great as a breakfast or for dessert on Monday.

Feeding a crowd? Here are a few more brunch ideas:

Spread the batter onto the bottom of the prepared pan.
Cover with the cream cheese mixture.
Bake 55 to 60 minutes, or until the centre is set.
Allow the cake to cool.

Cut into 16 portions and place on plates.
Sprinkle with
confectioners' sugar
Top with a dollop of sour cream and jam (optional)

April 15 - The waning gibbous Moon is at apogee, its farthest point from Earth. (An easy way to remember: Apogee = Away)

April 16 - In the morning, look to see the waning gibbous Moon just 5 degrees from Saturn. Look to the west at nightfall to see the “Seven Sisters” (known as the Pleiades Star Cluster) hover above Mars.

April 19 - Last quarter Moon, 5:57 p.m. The Moon appears as a half Moon in the sky. One-half of the Moon is illuminated by direct sunlight while the illuminated part is decreasing, heading toward the New Moon (invisible) phase.

April 21 - Late Friday night into the early morning hours of Saturday, look for the Lyrid meteor showers. Up to 10 “shooting stars” per hour radiate from a spot near the brilliant bluish star Vega. The waning crescent moon will not rise until after 4 a.m., thus assuring dark skies most of the night. These meteors are the dust left behind by Comet Thatcher, which visited the inner solar system in 1861.


April 27 - The barely visible waxing Moon (3% illuminated) is at perigee, its closest point in its orbit to Earth for the month.
Posted by Margaret Ullrich at 10:25:00 PM