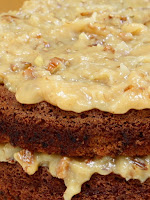 It’s been a while since I posted a chocolate cake recipe.
I think the last one was about a year ago...
the recipe for Ma’s Mocha Cake.
The most popular chocolate cake recipe I've ever posted - it’s received over 2,000 visits - was Carmela Soprano’s Baci Cake.
Baci Cake does take quite a bit of work...
but then, don’t most delicious recipes?

Well, it’s definitely time for me to post another chocolate cake recipe.
And with Easter coming, why not go for a special one.
German Chocolate Cake is like Baci Cake in that it takes a bit of work, and is delicious.

Mrs. Kekelia had given me a slice when I was four years old.
Well, I told Ma about it, Ma asked Mrs. Kekelia for the recipe, Mrs. Kekelia kindly gave her a recipe, and Ma made her usual tweaks.
Don’t ask me which version I found most delicious.

I don’t have Mrs. Kekelia’s recipe, but luckily I have Ma’s recipe.
And now, so do you.

In a mixer bowl, beat at medium speed until foamy
3 large egg whites
Increase the speed to high and beat until stiff peaks form when the beaters are lifted.

Add, one at a time
3 large egg yolks
Beating after each addition.
Blend in
3/4 teaspoon vanilla
the melted chocolate

With a spatula gently fold about a quarter of the egg whites into the mixture.
Repeat 3 times.
Spread batter in prepared pans.
Bake 40 - 50 minutes, until cake tester inserted in centre comes out clean.
Remove from oven. Immediately run small spatula around the cakes.
Let the cakes cool in the pans on a wire rack for 15 minutes.
Remove the cakes from the pans and let them cool completely.

Place an upside down layer on a serving platter.
spread half of frosting over the layer.
Top with second layer and cover with the remaining frosting.

Would you like recipes for German bread, cookies or kuchen?
Here are a few of my old favourites, compliments of Mrs. Kekelia:

April 2 - Look toward the west after nightfall to see the waxing crescent Moon (40% illuminated) inside the Winter Circle asterism. This formation of stars looks more like a hexagon than a circle, and is made up of seven colorful stars:  Sirius (white), Rigel (blue), Aldebaran (orange), Capella (yellow), Castor (white) & Pollux (orange), and Procyon (yellowish-white).

April 6 - Look to the southeast and dusk to see the Moon less than 2 degrees from the star Regulus. Regulus is the brightest star in the constellation Leo the Lion.

April 7 - Jupiter is at opposition, meaning opposite the Sun. It will rise in the east near sunset and will remain in the sky all night long. Around this time it is closest to Earth for the year.

April 11 - April’s Full Pink Moon will be astronomically full at 2:08 a.m. This is the first full Moon of the spring season.