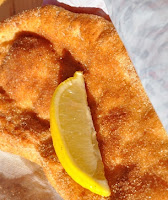 I first tried BeaverTails when we went to Ottawa for our fortieth anniversary back in 2012.
They are a Canadian treat, a flattened piece of dough that’s fried then sprinkled with cinnamon sugar.
That’s the classic version.

But they’ve gone very creative withe the toppings and you can enjoy yours topped with anything from chocolate or caramel sauce to fresh fruit.

We also enjoyed BeaverTails when we vacationed in Quebec City last Fall and here in Winnipeg during Festival du Voyageur last February.

BeaverTails are truly a Canadian favourite!

Angel Wing Cookies - Polish Chrusciki - is another doughnut recipe.
They are delicate, perfect with a cup of tea, and were a great favourite at gatherings at St. Fidelis Church. When Ma saw us going for seconds - and thirds - she asked a neighbour for the recipe.

A Maltese doughnut recipe - Imqaret (Deep-fried Date Slices) - has a bit of heft to it, more like a jelly doughnut. Imqaret is fried with the filling, made from dates, already in it. There isn't any yeast in the dough.

Speaking of Jelly doughnuts, they were pretty popular when I was a kid in College Point. My German friends had plenty of jelly- or custard-filled doughnuts. They called the doughnuts bismarks, or Berliners, or long johns.
In Manitoba jelly doughnuts are called jam busters, while in Nova Scotia they are called Burlington buns.

Ah, doughnuts! who doesn’t love them!

If you’re using a mixer you’ll need the dough hooks.
If you don’t have the hooks, use a wooden spoon.

If you don't have a deep-frying thermometer, test the oil by slipping a bit of the dough into the oil.  It should sizzle and float to the surface in 1 minute.
You don’t want the oil too hot. If you see it smoking, take the pot off the heat to cool the oil before frying.

If you don’t want to deep fry, you can cook as you would pancakes, in a lightly greased pan. They will be a bit different, with a bumpy surface and unevenly brown colour, but you can add toppings to hide that.

If you want a bit of variety, you can also top with lemon and sugar, Nutella, maple syrup, melted chocolate, caramel sauce, toasted nuts, or jams or anything else that strikes your fancy.

While the mixture is standing, melt
2 Tablespoons butter

Add
1 Cup flour
Mix the flour in - you’ll need the dough hook at this point.
Mix until the dough comes together and no longer sticks to the sides of the bowl.
Knead for about 6 minutes in the mixer
Turn out and knead the dough by hand for 10 minutes.
Use extra flour if the dough is sticky. You want it to be smooth, but not dry.

Lightly oil a bowl, then place the dough in it and cover with a damp towel.
Let the dough rest in a warm place for 1 hour, until doubled in size.

Punch down the dough and it place on a lightly floured flat surface.
Cut the dough into eight equal sized pieces.

Using a rolling pin, roll out each piece of dough into an oval shape, about 1/4 inch thick.
Place the oval on a lightly floured baking sheet.
Repeat with remaining dough pieces.
Cover with a tea towel, until all the pieces have been rolled.
Keep the rolled out dough covered and leave to rise for 30 minutes or until doubled in size.

In a deep saucepan or deep fryer pour
2 inches vegetable oil
Heat to 350º F on a deep-fry thermometer or test with dough (see above).
Carefully slide 1 to 3 doughnuts into the hot oil.
You don’t want to crowd them and you want to be able to remove them as soon as they are done.

Fry on each side for 1 to 2 minutes, until each side is a light golden brown.
Remove the doughnut with a slotted spoon or a pair of tongs and drain on paper towels.
Dunk them in the cinnamon sugar topping and toss to coat (or see above)
Just before serving, sprinkle them with lemon juice (optional)
Best when fresh and warm.

July 5 - Tonight, look to the south in the evening to spot star Antares and Saturn. You’ll be able to see them even though the Moon is nearly full. Antares is a star, so it will twinkle with a reddish hue, while Saturn, a planet, will glow with a steady golden light.

July 6 - The waxing gibbous Moon is at apogee, its farthest point from Earth in its orbit. An easy way to remember: Apogee has an “A” = Away.

July 7 - Look to the south right after sunset to see the waxing gibbous Moon, the planet Saturn and the Antares. They will be remain visible until well past midnight.

July 9 - Full Buck Moon at 12:07 a.m. The visible Moon is fully illuminated by direct sunlight. Learn how this Moon got its names.


July 12 to mid-August - Delta Aquarids meteor shower. On July 28-29 it peaks. Best viewing is looking to the south, after midnight until 3 a.m. This is a good year to view them at their peak as there won’t be any glare of the Moon! There’s a possibility of 10-15 meteors per hour. These showers cross paths with August’s Perseids.
Posted by Margaret Ullrich at 5:00:00 PM