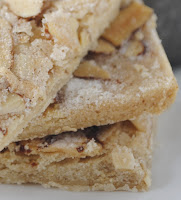 December is just zipping along.
I mean, in just two weeks Christmas will be here!

Oh, my…  Two weeks before Christmas!
Say that to a kid and he’ll envision a chunk of time about as long as a century.

Say it to his Mom and she’ll swear it’ll go by faster than a sneeze.
Especially if she belongs to a club or two and just found out there’s going to be a potluck, or if Sonny Boy brought home a note saying he needs a few dozen cookies for a ‘Holiday Party’ at school.

Christmas or Holiday, it means the same thing, work-wise.
Good old Mom has to add something else to her ‘To Do’ List.

Okay, this is not the time to get all fancy, unless of course you're the type who loves doing things at the last minute.
For most of us a good, simple, easy to do, cheap recipe is what is called for.
It’s time to make some Jan Hagel cookies.

Jan Hagel cookies were a regular Christmas treat in New York when I was growing up.
It was a traditional Dutch recipe that everybody knew, so, if you brought some to school or to a gathering, nobody gave your cookies the fisheye.
Everybody just grabbed a couple and said “Merry Christmas!!”
None of that politically correct ‘Holiday Party’ crap in the 1950s.

Ma might have gotten the recipe from a co-worker or a neighbour.
Of course, she made her own variations.

About the pan: use a 15 1/2″ by 10 1/2″ by 1″ or whatever you have.
If you prefer thin cookies you might need a second pan. Some people made very thin cookies (about an 1/8th of an inch) which bake up crispy, some preferred thicker, softer ones. Suit yourself.
The thicker cookies need a bit more cooking time, about 5 to 10 more minutes.

Back in the 1950s nobody seemed to have nut allergies.
But this is now, and if you want to play it safe, leave out the nuts.
You could also sprinkle rolled oats on top of the cookies instead of using nuts.
If you’re not worried, some finely chopped walnuts or pecans would also work, especially if that’s what you have on your shelf.

Dutch kandij is the traditional sugar to use to decorate Jan Hagel cookies.
Yeah, well, if your local store doesn’t carry them (most likely it won’t), don’t panic.
If you want to go to the trouble, you can make your own:
Line a baking sheet with aluminum foil or parchment paper.
Place in a saucepan
1/2 Cup sugar
Melt over a high heat. Do not stir. When the sugar is a liquid, pour it as thinly as possible onto the foil or parchment. The sugar will harden. Once cooled, chop it.
As the cookies bake the larger pieces will remain, while the smaller ones will melt.

Ma just sprinkled regular sugar on her cookies.
Some of her friends used brown sugar.
In the 60s some used coarse sugar in the raw.
Again, suit yourself.

Here are a few other easy Christmas cookie recipes:

Place the dough in the greased pan.
Place plastic wrap or wax paper that a bit larger than the pan over the dough.
Use a rolling pin to roll out the dough evenly in the pan. Or you can use your fingers.
Lightly score the dough with a fork into square or strip shapes (optional).

In a small bowl place
1 egg white
1 Tablespoon water
Beat until frothy.
Brush the egg mixture over the dough.
Sprinkle with
1/2 Cup sliced almonds
Dutch kandij (see hints), or crystallized or regular sugar
Bake 20 to 25 minutes, until very lightly browned.
Remove from oven and, using a sharp knife, cut immediately into squares or strips.
Leave them on the pan(s) to cool thoroughly so they don't lose their shape.
These cookies taste better when they are thoroughly cooled.

About the sky for the rest of December, thanks to the folks at The Farmers' Almanac…

December 18 - New Moon at 1:30 a.m. The Moon is completely invisible to the naked eye. Incidentally, this new moon ushers in the longest lunar month of the 21st century (2001 to 2100). A lunar month is the period of time between new Moons. The New Moon is at apogee, its farthest point from Earth in its orbit. Need an easy way to remember? (A)pogee = (A)way.

December 20-23 - Nature’s annual holiday light show, the Ursid meteor showers, are at their peak. Visible from the north all night, these meteor showers generally produce anywhere from 5 to 15 meteors per hour at their peak (usually on the first full night of winter, Dec. 22).  They are the dusty debris left behind in the orbit of Comet Tuttle. There have been a few occasions when the Ursids have surprised observers with a sudden outburst many times their normal hourly rate (over 100 per hour in 1945), but such cases are very few and far between.

December 21 - Winter officially begins at 11:28 a.m. with the Winter Solstice. The Sun reaches its farthest point south of the celestial equator so it’s the shortest day of the year in terms of sunrise to sunset. The good news is that the days will start getting longer from here!

December 29 - Before sunrise, look to the southeast sky to see Mercury (hugging the horizon), Jupiter, higher in the sky, and Mars directly above Jupiter.


December 30 - The Moon occults Aldebaran, the brightest star in the constellation Taurus.
Posted by Margaret Ullrich at 4:48:00 PM