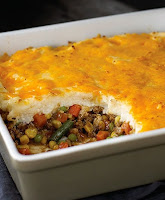 Goodness, we’re almost halfway through March!
We had a bit of snow last week, but, with the warmer weather, it’s been melting nicely.
Hope March is being kind to you, too.

Well, the last post was about Saint David's Day and had a Welsh Pancakes recipe.
It’s always handy to have another pancake recipe on hand.
Now it’s time to get ready for St. Patrick’s Day.

Shepherd’s Pie is also known as Cottage Pie.
it’s a nice basic recipe that has familiar ingredients.
The kiddies never get spooked by ground beef or mashed potatoes.
And it’s a great way to use up leftover bits in the fridge.
After all, we have to start making room to defrost the Easter turkey.

Don’t forget to top off your meal with a glass of Irish Coffee!

May you always have
Walls for the winds,
A roof for the rain,
Tea beside the fire,
Laughter to cheer you,
Those you love near you,
And all your heart might desire!

Have a bit less than a pound of ground beef? Kidney beans, or any other beans, can be added to up the protein.
If you’re serving vegetarians, the beans can totally replace the meat.

Like your Shepherd’s Pie filling spicy? Add, to taste, any of the following:
cumin, basil, oregano, garlic powder, onion soup powder, chili powder or chili sauce.
A mixture of thyme and crushed rosemary leaves (about 1/2 teaspoon of each) also adds a nice touch.

Don’t have any gravy on hand?
Use BBQ sauce or a can of tomato or mushroom soup diluted with 1 can of water.

If you have leftover or canned mixed vegetables or mushrooms or corn or peas (or a combination), you can use that instead of the frozen. Creamed corn adds a bit more moisture, which is handy if you don’t have much gravy.

Have a bit of mozzarella or herb and garlic cream cheese in the fridge? You can use that instead of the plain cream cheese. Or you can leave the cheese out entirely.

To get really creamy mashed potatoes, use a potato ricer or sieve. Be sure the mashed potatoes are hot when you spread them. Cold mashed potatoes is harder to spread. You want a textured surface on the potato topping, so rough it up a bit. It’s like adding the meringue to a lemon meringue pie - the points become nicely browned bits and make it look more appetizing.

If your mashed potatoes seem a bit dry or not quite enough, you can add sour cream.
Want to get fancy? Top the potatoes with pieces of bacon and fried onions.

You can prepare the pie in a casserole in advance, then refrigerate or freeze.
Cooking for one or two? The pie can be made into individual or for-two pies, using smaller pans. You can freeze the extra servings. Remember to defrost at room temperature before baking as directed in the recipe.

For a crisp golden topping, flash under the broiler for a few minutes before serving.
The kiddies might like a dollop of ketchup on their servings.

Peel and cut into 1" cubes
2 pounds potatoes
Cook in boiling water for 15 minutes or until soft. Turn off the stove.
Drain, then return the potatoes to the pot and place it on the burner you had used.
Shake the pot briefly and allow the potatoes to steam dry for about a minute.
If there is excess liquid in the potatoes it will make the topping watery.

If you have a potato ricer or sieve, use it and return the riced potatoes to the pot before adding
2 Tablespoons butter
Mash until melted.
Add
1/2 - 3/4 Cup milk
salt to taste
a dash of nutmeg (optional)
Mash until smooth.

Spread the potatoes onto the filling, and rough up the surface.
Sprinkle with
1/2 Cup shredded old cheddar cheese  (optional)
Bake for 20 minutes or until golden on top and bubbling on the edges.
Stick a knife into the middle to ensure it is piping hot.
Let stand for 5 minutes before serving.

March 17 - New Moon at 9:12 a.m. In this phase, the Moon is not illuminated by direct sunlight and is completely invisible to the naked eye.

March 18 - About 45 minutes after sunset, look low toward the western horizon to sight an extremely narrow (2-percent) crescent Moon.  About 4-degrees to its upper right shines Venus, and a similar distance to Venus’ upper right will be Mercury, still shining at a respectably bright +0.4.

March 24 - First quarter Moon at 11:35 a.m. In this phase, the Moon looks like a half-Moon in the sky. One-half of the Moon is illuminated by direct sunlight while the illuminated part is increasing, on its way to full.