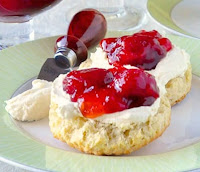 Goodness, time just flies!
Has it really been about seven years since we baked a batch of Ma's Orange Cranberry Scones to enjoy while we watched Prince William and Kate Middleton get married?
Now we’ll be able to see his brother, Prince Harry, and his lovely fiancé stroll down the aisle.
I can’t wait to see what Meghan will wear!

During William and Kate’s wedding one of the TV announcers mentioned how folks in Merry Old England were sitting down to a brekkie of tea and scones, too.

In keeping with the situation, I plan to bake scones to serve with Twinings English Breakfast tea.
Tradition is important, after all.

All would be delicious with a cup of tea… or a Cosmopolitan or two.

To do it up in a right proper, veddy British way, the scones should be served with clotted cream, which is also called Devonshire or Cornish cream.
Clotted cream has a nutty, cooked milk flavour and as much fat as butter.
It is a thick cream made by heating cow's milk and then letting it cool slowly so that the cream rises to the surface and forms "clots”.

The Clotted Cream will keep for about a week in your fridge and can be added to mashed potatoes, risotto or scrambled eggs.
It is also delicious with berries, fruit, a slice of pie, or as a topping on any dessert you’re serving.
Well, just about any dessert... probably not on an iced cake.

About the clotted cream…
You might be able to find clotted cream in the dairy section of your supermarket.
Most likely, you won’t find it in a North American store.
Not too worry. It’s not hard to make.

If you don’t have a double boiler place a heatproof bowl over a saucepan of water.
After you scrape off the thicker part of the clotted cream, you’ll be left with cream that is thinner than heavy cream.
Don't toss it. It can be added to beverages or dishes, as you would half and half.

In a rush? Have mascarpone? You’re in luck. You can use mascarpone to make fake Clotted Cream:
Place in a large bowl
4 ounces mascarpone
1 Cup heavy cream
1 teaspoon vanilla
1 or 2 Tablespoons sugar
Zest of lemon or lime (optional)

Beat until the mixture looks like softly whipped cream.
Use right away or cover and refrigerate the cream until serving time.
Makes about 1 1/2 cups


Not sure if you'll have any use for a tub of mascarpone?
It is a soft unripened cheese that has the texture of sour cream.
Its mild flavour is great with fresh fruit and it is an ingredient in Tiramisu.
You've probably enjoyed it already.

Heat over medium heat to bring the cream to 175º F, stirring occasionally so that the cream will heat evenly.
Once you reach 175º F, bring up the temperature to 200º and allow the cream to cook about 45 minutes to an hour. The cream should get a cracked skin.
Remove the top of your double boiler or bowl and place the container of cooked cream in a pan of ice water to cool quickly.
Cover the cream with plastic wrap and place the container in the refrigerator.
Let it sit overnight.
Carefully skim the clotted cream off with a shallow spoon and layer it into a bowl.
Serve it as you would serve butter.
Posted by Margaret Ullrich at 9:03:00 PM