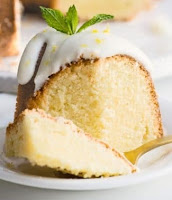 It’s funny how a holiday can make you think of a certain dessert. Think about it…
Love it or hate it, everyone expects to see a fruitcake at Christmas.
And what’s Thanksgiving without a slice or two of pumpkin pie topped with whipped cream?

Here we are, in June, and every Canadian is in summer vacation mode.
We’ve gone through our usual long winter and can’t just serve another winter dessert.
Cobblers and coffeecakes - good as they are - have their place, and that’s not at the end of a summer meal or barbecue.

Tangy lemon recipes are perfect for ending summer meals and barbecues.
Lemon Surprise Cake is a summer recipe that was popular when I was a kid.
Ma wasn’t big on buying soda, but she'd heard a few of her co-workers talk about this really easy cake recipe.
Then one of her friends brought a slice to work and shared a bite with Ma.
Ma liked it and, when Ma made a cake for us, we did, too.

You can use sugar-free soda.

If the frosting to too thick it can be thinned with a little water or lemon juice or milk.

For a lighter touch you can make a simple glaze:
Mix together
2 Cups confectioners’ sugar
6 tablespoons lemon juice
Drizzle over the cooled cake.

You can also make this into a poke cake:
Using a fork, poke holes in the warm cake and pour the lemon glaze over the cake. Cool the cake and serve.

You could melt some chocolate and drizzle it on the top of the cake.
White chocolate goes well with the lemon lime taste.

You can also use a container of fluffy type frosting or just give the cooled cake a dusting of confectioners’ sugar.

Place in a large mixer bowl
1 1/2 Cups butter, at room temperature
3 Cups sugar
Beat at medium speed until light and fluffy.
Turn down the speed to low and add one at a time
5 large eggs, at room temperature
Beat well after each addition.
Add
2 Tablespoons lemon extract
3/4 Cup 7-up or Sprite or any lemon-lime soda
Stir until just blended.
Stir in, 1 Cup at a time
3 Cups flour
Stir until just blended.
Pour the batter into the prepared pan.
Bake for 1 hour and 15 minutes.
A toothpick inserted into the cake should come out dry.
Cool cake in the pan for 10 minutes before removing.
Run a knife around, between the cake and the cake pan, to loosen the cake.
Carefully remove the cake and cool it on a wire rack.
Place the cake on a pretty serving platter.

While the cake is cooling, prepare the icing:

Place in a medium mixer bowl
4 Tablespoons butter, at room temperature
Beat at medium speed until light.
Beat in
1 teaspoon lemon extract
Turn down the speed to low and add, 1 Cup at a time
3 Cups confectioners’ sugar
Spread over the cooled cake.
Garnish with slivers of lemon rind.

Look for the Big Dipper asterism, referred to as The Plough by those in the U.K. As the most recognizable star pattern in our night sky, it will be high in the north in the evening hours during the month of June.

June 6 - Mercury passes from the morning to the evening sky. Observers who closely follow Venus may be able to see Mercury as early as the evening of the 13th in rather bright skies, about a half hour after sunset and hovering just above the west-northwest horizon nearly 30-degrees to the lower right of Venus.
Mercury, at magnitude -1.4, will then match Sirius (the brightest star) yet will be fainter than Venus by nearly three magnitudes. By month’s end, Mercury dims to magnitude -0.1, but is more easily found, setting 1½ hours after the sun.

June 9 - Stargazers can still spot the Summer Triangle on these spring evenings at dusk. Look for a triangle that’s composed of the three brightest stars in the sky: Deneb, Vega, and Altair.

June 11 - At dusk, Venus forms a nearly straight and horizontal line, just over 10° long with the much fainter “Twin stars,” Pollux and Castor. For viewers at mid-northern latitudes, June is the month when Venus appears highest right after sunset. This dazzling world (magnitude -4.0) is more than 25-degrees high at sunset now for observers around 40-degree north latitude. It sets about 2½ hours after the Sun at the start of June and maintains this interval throughout the month.

June 13 - Tonight is a Supermoon! But you won’t see it. That’s because its in the “new” phase. The new Moon will be at its closest point to Earth in its orbit on the 14th.
A lovely crescent Moon and Venus likely will attract attention to even casual sky watchers at dusk, although they are not really all that close to each other; Venus appears 7 or 8-degrees to the right of the moon as they descend the west-northwest sky.

June 14 - Earliest sunrise of 2018. This happens every year around mid-June. The Moon is also at perigee, its closest position to Earth, at 7:45 p.m.


June 15-16 - After sunset look for Venus and Mercury near the waxing crescent Moon, 30-45 minutes after sundown. Mercury will be beneath Venus and very close to the horizon.
Posted by Margaret Ullrich at 9:35:00 PM