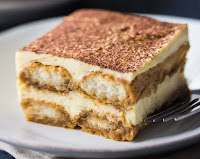 The one thing I’ve learned as I get older is that I really appreciate doing things in the easiest, quickest way possible.
And that includes recipes.

I’m not saying I want to live on bread and water, but I sure don’t want to spend all day in the kitchen, especially during the summer when it’s so hot, both indoors and outdoors.
Yes, it really does get hot in Manitoba.

One of my favourite desserts to serve in the summer is tiramisu.
It is easy to prepare and means something like “Cheer me up” in Italian.
Yes, it does lose something in translation.
Tiramisu has a nice ring to it and is easy to remember.

Ma had an easy version of the classic recipe.
It gets the ‘adults only’ rating because it has strong coffee in it.
If you choose to serve it to the kiddies, well, you’ve been warned.
This could make them a bit hyperactive.
Oh, well, it's summer. They'll run it off.

If you don’t have ladyfingers, vanilla wafers (Nillas) can be used.
Or you can make Ma’s Ladyfingers.

You can use one thawed container of whipped topping instead of the whipped cream.

For a bit of an extra kick use 2 Tablespoons amaretto or Cognac instead of the rum extract in the cream cheese mixture.

In a few weeks, when we’re in the hottest part of summer, the gang will be sure to enjoy Anna Sultana’s Frozen Tiramisu, Maltese Style.

Place a medium mixer bowl and beaters in the refrigerator.

Have on hand
48 savoiardi or ladyfingers

Take the medium mixer bowl and beaters out of the refrigerator.
Place in the bowl
2 Cups heavy cream
Beat the cream until soft peaks form.

Lightly dip into the bowl of cooled coffee
24 savoiardi or ladyfingers
Arrange them in a single layer in a 9 x 13 inch pan.
Spoon half of the cream mixture over the ladyfingers and spread evenly.
Sprinkle over the surface
1/2 of the grated bittersweet chocolate

Cover and chill for at least 3 hours. Overnight is better.

June 20 - First Quarter Moon 6:51 a.m. In this phase, one-half of the Moon appears illuminated by direct sunlight while the illuminated part is increasing.

June 21 - Summer Solstice at 6:07 a.m. This is when the Sun reaches its farthest point north of the celestial equator, giving us the longest day of the year in terms of daylight. Summer is officially here in the Northern Hemisphere!

June 23 - Once it gets dark, take note of Jupiter in the south-southeast, shining to the lower right of the bright waxing gibbous Moon. Jupiter was at opposition in early May, so in June it fades ever-so-slightly to magnitude -2.4 and gets a trace smaller in telescopes. Although Venus outshines it, Jupiter is the dominant light in its part of the sky and still offers a generously big disk; given good seeing and a large telescope, it can be rich in telescopic detail.

June 27 - Saturn comes to opposition in grand fashion, being accompanied across the sky by the full Moon, which itself also happens to be opposite to the Sun. Saturn will arrive at opposition at 8:17 a.m. The Moon will pass about 1° to its north about 15 hours later at around 11 p.m. late Wednesday night and will then officially turn full at 12:53 a.m. on Thursday.

June 28 - Full Strawberry Moon at 12:53 a.m. The visible Moon is fully illuminated by direct sunlight. Though the Moon is only technically in this phase for a few seconds, it is considered “full” for the entire day of the event, and appears full for three days.

June 29 - Moon is at apogee 10:29 p.m., its farthest point from Earth. An easy way to remember: Apogee = Away. You can also try to spot the planet Mercury beneath Venus low in the western horizon, 1 hour after sunset. Mercury, Venus, Mars, Jupiter, and Saturn are the five brightest planets, and all have the possibility of being seen after sunset.


June 30 - Look to the southeast in the evening for the waning gibbous Moon and Mars to rise into the southeast sky about mid-to-late evening.
Posted by Margaret Ullrich at 7:52:00 AM