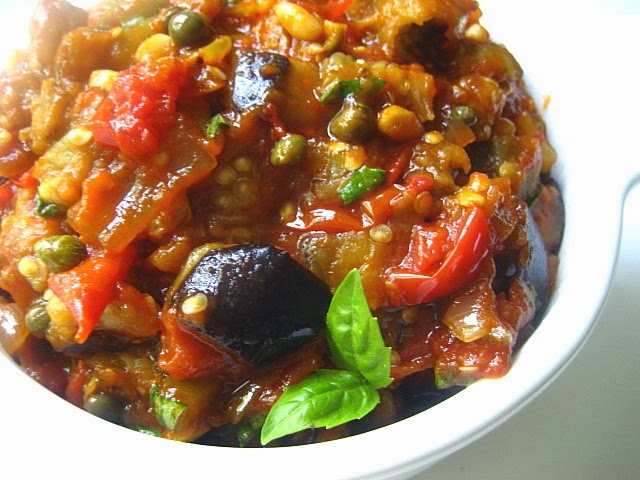 Okay, I know how it is.
Eggplants are like potato chips.
It's hard to stop at just one.

Maybe I am overstating it, just a teenie bit.

But really, eggplants are a staple in the Mediterranean.

If you flip through an Arabic cookbook, you'll see a recipe for 'The Imam Fainted'.
It uses eggplants.
No, the Imam didn't faint because it smelled funny.
Legend has it that the Imam's new bride had been given dozens of huge jugs of extra virgin olive oil as part of her dowry.
No cracks about the extra virgin.

After dinner, the Imam noticed the jugs were empty.
The oil was all gone.
It had been used in preparing that dinner.
Knock it off with the extra virgin jokes.

Maybe the legend is overstating it, just a teenie bit.

But sucking up oil is a slight fault of eggplants.
Nothing's perfect.
When folks loved the pre-Dancing With the Stars Kirstie Alley look, no problem.
Now most people brush a bit of extra virgin olive oil (extra virgin has a stronger olive taste) on each side of an eggplant slice and broil the slices instead of frying them.

Oh, what we do to stay slim and trim.
Quit the cracks about the extra virgin.  Now.

We Maltese eat lots of eggplants, too.
Kapunata is similar to the Italian recipe Caponata.
So here's a recipe for our Kapunata.

Cover and simmer until the vegetable are tender.

This keeps well in the fridge.
Handy for the hot summer days that are coming.