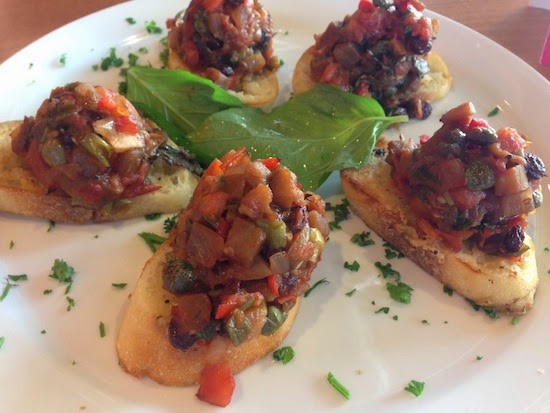 Okay... I told you there's an Italian recipe like the Maltese Kapunata.

And, lucky for us, in the Small Events for Men Only chapter of Carmela's
Entertaining with The Sopranos, Carmela has a recipe for Caponata, also known as Sweet-and-Sour Eggplant.

No, it's not a Chinese recipe.

Like I've said before, I don't know who put together this book.
Perfect Lent recipes in the wedding section.
A family vegetable dish in the 'cigars and brandy' chapter.
Sheesh.

Caponata is a simple vegetable dish.
Not just for Tony and the boys.
Bobby's kids could dip some bread in Caponata and snack away.
It's much healthier than candy or cake.

Whip up both and let everybody dig in.
Yes, even your fussy eighty-year-old Aunt.
She'll ask for the recipes.

Cut into 1 inch cubes
1 large eggplant
Place in a colander, sprinkling each layer with salt.
Place colander in a pot so the water can drain.
Let stand 60 minutes to drain the excess liquid.

Test by adding a piece of eggplant - it should sizzle rapidly.
Add some of the eggplant gently so it doesn't splash on you.
Don't crowd the pieces, you want them to fry, not stew.
Cook, stirring regularly, about 10 minutes.
Remove with slotted spoon and drain on paper towels.
Repeat with remaining eggplant.

Stir the cooked eggplant into the sauce.
Simmer 10 minutes.
Cool and serve at room temperature.
It's also nice with crusty bread.

Leftovers can be stored in the fridge up to 3 days.

Would I make Carmela's Caponata again?
No.
I just prefer my Ma's Kapunata.
Less trouble, less oil and less frying.
And I like the green peppers.
Suit yourself.

Another recipe down.  Twenty-one more to go.
Posted by Margaret Ullrich at 8:57:00 AM