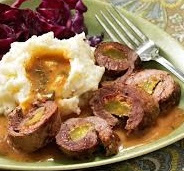 Got a few emails after I posted Carmela Soprano's Braciole.

I had mentioned that it's similar to the German recipe Rouladen.
So, folks asked, what's this Rouladen?
Think of it as the German Braciole.
You just can't keep a good idea down on the farm.
Or just in Cooking the Neapolitan Way.
How did Ma know about Rouladen?
We lived in College Point, an Irish / German town.
The grocery store there, like the grocery stores here in Winnipeg's North End,
catered to its customers.
No fancy stuff, like prosciutto.
But, they did have thinly sliced steaks packaged and sold for Rouladen.
They were also perfect for making Bragoli.

One day I had eaten Rouladen at a friend's home.
I told Ma about it.
Ma asked my friend's Mom for the recipe.
Which she shared.
As Moms do.
Then pickles and potatoes were on sale.
Well, need I say more?

This recipe serves four.
But, it's easy to double.

Rouladen
Halve and then thinly slice into half rings
1 onion

Cut in half lengthwise
2 large dill pickles
Place on a board
4 thin slices beef round, flank or top butt (about a pound)

Fold 2 opposing sides in towards the center, forming a rectangle.
Roll up each rectangle like a sausage and tie with a string.
In a dutch oven heat
4 Tablespoons oil
Add
the rouladen
Cook, turning the meat until it is browned on all sides.
Drain the fat.

Serve the rouladen with mashed potatoes seasoned with nutmeg.
Also serve either cooked vegetables or a salad.