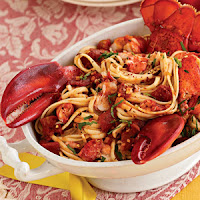 You know there'll be a surprise card on December 23 from somebody you barely know.
House clean… It's good enough.  Just allow visitors at night and use candles.
Gifts bought… Well, most of them.
On to step 2: shop the house.

It's time to think of the big day's main course.
Twelve days to the holy feast of Christmas.
Peace on earth, good will toward men.
Yeah, right...

Back to Jennifer's chapter:
Rage, Guilt, Loneliness, and Food in Artie's The Sopranos Family Cookbook.
Lobster in Spicy Tomato Sauce with Linguine looks about right.

What is it about Artie's book and my local grocery stores?
Both flyers mentioned there were deals to be had on lobster.
Yeah, well, not in this neighbourhood.

The guys in the meat department just love it when they see me.
When I ask for something a little special it just makes their day.
Live lobsters?
North End Winnipeg?
You gotta be kiddin'!!

Maybe there is something hilarious about live lobsters.
Remember the boiling lobster scene in Annie Hall?
And Julie had to live with the guilt of being a lobster killer in Julie & Julia.
They just had to toss the lobsters into a pot and boil them.

The method in Artie's book is a lot more violent.
Well, what do you expect in a Sopranos cookbook?

Okay… here's how Tony's boys do the deed:
First thing:
Knock back a few stiff drinks to steady your nerves.
DO NOT remove the rubber bands that keep the lobster claws shut.
Wear oven mitts to protect yourself.

Okay… here we go:
Place a LIVE lobster upside down on a cutting board.
Hold the lobster by the tail and plunge the point of a heavy knife into the body,
where the tail joins the chest, and cut off the tail.
Continue hacking up the lobster at the joints into 2 inch chunks.
Crack the claws.
Remove the rubber bands.
That's one dead lobster.

There's more than one way to feed the family something fishy and fancy.
Frozen jumbo shrimp.
No muss, no fuss, no lobster claws, no big knives.

Shrimp is smaller and a quicker cook.
Do the frying bit until they're pink, then remove them from the pot.
Add the other ingredients and simmer 20 minutes.
Add the shrimp for the last 10 minutes.

The spicy tomato sauce is good with lobster or shrimp.
Yeah, right, the sauce is red.
Ya got a problem with that?

While the sauce is simmering, in a large pot place
4 quarts water
salt to taste
Bring to a boil.
Add
1 pound linguine
Cook, stirring frequently, until the pasta is al dente.
Drain the pasta and add it to the sauce.
Toss the pasta until it is coated.
Arrange the pasta in a warm serving bowl or platter.
Top with the lobster.
Serve immediately.

Would I make Lobster Fra Diavolo?
Sure.  With shrimp.
And I better not hear any complaints.
I still have that big heavy knife.

One recipe down.  Sixty-seven more to go.