Barefoot in the Park in Winnipeg by Margaret Ullrich 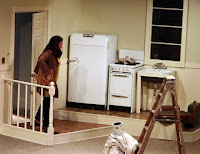 Last summer I posted about our move to British Columbia in 1972.

I explained that I had been deeply impressed by seeing Lucille Ball and Desi Arnaz's
movie The Long, Long Trailer when I was in elementary school.
Inspired by Lucy's adventure, I was sure that one day I, too, would live in a trailer.

A few years later, Neil Simon's Barefoot in the Park premiered on Broadway in 1963.
That production starred Robert Redford and Elizabeth Ashley.
The play was made into a film in 1967, starring Robert Redford and Jane Fonda.
So, Barefoot was part of popular culture during my high school years.

In Simon's play a newly wed couple live on the top floor of a New York brownstone.
Corrie and Paul had to walk up 6 flights of stairs to get to their top floor flat.
Well... Five flights, if you don't count the front stoop.
The apartment was a tiny, barely liveable dump.
Snow drifted through the hole in the roof.
The bride was a well meaning optimist.
The groom said things like "Well, I'm 26, and cold as hell" and got sick.
The only sign of a neighbour was the pile of empty cans of tuna fish by the door.
An eccentric older man guided them through the adventure of life in their new city.

In 1975 I went from Lucy in the trailer to Corrie in the attic as a lifestyle role model.
Okay…  maybe I don't think things through.

Paul and I were living in an attic apartment which had one room and a kitchen.
It was a third floor walkup - four flights, if you didn't count the front stoop.
As was said in Barefoot:  It may be a stoop, but it climbs like a flight.
Thanks to the sloping ceiling, Paul couldn't stand up in half of the apartment.
A preschooler couldn't stand up in half of it.
We slept in our sleeping bags.
It was like we were perpetually camping, with all the discomforts.

We shared the bathroom with Mrs. Solomon, who lived across the hall.
Actually, it was bathrooms.
One room had a tub and a sink, the other room had a toilet.
We never saw Mrs. Solomon.
Every morning and afternoon we heard the clanging from her bag of bottles.
We spent many evenings debating whether they were bottles of soda or booze.

Winnipeg is where the Red and Assiniboine Rivers meet in the Canadian Prairies.
It's at the longitudinal centre of North America, away from mountains and oceans.
As a result, it has an extreme humid continental climate.
Extreme doesn't begin to describe it.
It has gotten as high as 42.2 °C (108 °F) in July 1936.
And as low as −47.8 °C (−54.0 °F) in December 1879.
That's a hell of a difference.
They say Winnipeg has four distinct seasons.
Right.  If you're away on the wrong weekends, you can miss Spring and Fall.

Needless to say, there was no air conditioning in that apartment.
We barely survived the summer in it.
The summer of 1975 was a really hot summer.
Stores had run out of fans.
Updates on when fans might be coming to the stores were on the nightly news.
Paul came down with heat stroke.

We knew that winter was going to be just as bad.
We wondered about the heating system.
Six months later a second floor apartment was vacant.
We grabbed it.
Paul could stand up anywhere in the apartment.
There was a separate bedroom.
We bought a mattress and set up a bed.

Mr. Brown, the fellow who had explained the parking ban, was our new neighbour.
We shared another pair of bathrooms with him.
No problem.
Unlike Victor Velasco, Mr. Brown was bemused and helpful, like a kindly uncle.
Widowed, he had moved to the apartment to be near the Legion.

Paul enjoyed working in the art department of Bulman Brothers, a printing firm.
I liked working at an Italian bakery which was a couple of blocks from our apartment.
Things had taken a turn for the better.

In the 1970s Winnipeg didn't have many of the tourist things it has now.
Still, it had a certain charm.
Winnipeg had an active downtown, where people gathered, walked and shopped.
There were attractive store windows, like the toy-filled one that mesmerized the boys in A Christmas Story.
Winnipeg had fascinating small ethnic stores, historic movie theatres and restaurants.
This was before the oversized malls and big box stores destroyed many downtowns.

If there was a movie or show we wanted to see, we'd just stroll downtown.
After a show we'd pick up some treat - for a while we went through a 'fancy cheese' phase - and we'd nibble as we walked home.
We saw as many events, festivals and sights as we could.
We went to all the Folklorama pavilions.
Back then they crammed the whole world into one week.

Those were our Barefoot in the Park days…
Where it says keep off the grass
Isn't recommended for the very old
But when you're young and you're in love
The world is beautiful.