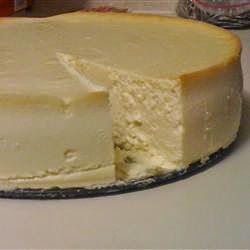 A little while ago I posted Carmela's Ricotta-Pineapple Pie.

And, yes, I do like it better than Carmela's New Jersey Cheesecake.
It's an almost guilt-free cheesecake.


It can be a substitute for mayonnaise in egg or tuna salad.
It can be used as a sauce thickener.
Add cinnamon sugar or chocolate shavings, and served ricotta as a dessert.
Ricotta, combined with citrus and pistachios, is the filling of the Sicilian dessert cannoli.
It is layered with slices of cake in Palermo's cassata.
Combined with eggs and cooked grains, ricotta is in La Pastiera and Pizza Rustica, which are traditional Easter dishes.
Ricotta is also used in main dishes: pasta, calzone, manicotti, lasagne, stuffed shells, and ravioli.


There is another ricotta pie recipe in Artie's The Sopranos Family Cookbook.
In the chapter contributed by Robert Baccalieri - better known as Bobby Bacala.
Bobby's chapter If I Couldn't Eat, I'd F**king Die, is a sweet ending to the cookbook.

Okay… Bobby is not a poster boy for diet food.
But you can't blame Ricotta Cheesecake for that.
Really.

According to the intro to the chapter,
Bobby is a connoisseur of Italian-American desserts…
Some of the other desserts probably didn't have ricotta in them.

Place the oven rack in the middle of the oven.

Spread over the bottom and sides of a 9-inch springform pan
1 Tablespoon unsalted butter, softened
Dust the pan with flour.
Tap out the excess.
Place the pan on a 12-inch square piece of heavy-duty aluminum foil.
Squeeze the foil tightly around the pan so that it will be water-proof.

While preparing the cheesecake, boil
about 6 Cups water

In a small bowl combine
1 1/2 Cups sugar
1/3 Cup cornstarch
Add to the ricotta mixture and stir until smooth.
Pour the mixture into the prepared pan.
Place the pan in a large roasting pan and place them on the oven rack.
Carefully pour the boiling water into the roasting pan to a depth of 1 inch.

Bake for 90 minutes.
The top of the cheesecake should be golden and a knife inserted 2 inches
from the center should come out clean.
LEAVE THE CHEESECAKE IN THE OVEN.
Turn off the oven and leave the door open a crack.
You can prop the door with a wooden spoon.
Cool the cake for 30 minutes in the oven.
Remove the cake from the roasting pan and remove the foil.
Cool the cheesecake on a wire rack until room temperature.

Serve at room temperature or slightly chilled.
The leftover cheesecake can be stored, wrapped, in the refrigerator.

Would I make Ricotta Cheesecake again?
Absolutely.  A cheesecake with less calories?
What's not to like?
I also like Carmela's Ricotta Pineapple Cheesecake.

One recipe down.  Forty more to go. 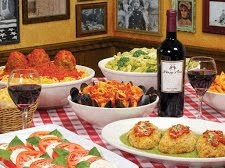