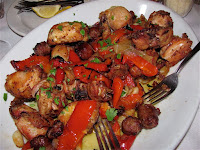 Sunday dinner with the family.

You just know somebody is going to complain.
It's best to have a sort of 'surf and turf' main course.
Something for everybody.  More or less...

There's a something for everybody main course in Artie's chapter Mia Cucina in The Sopranos Family Cookbook: Chicken Scarpariello.

Maybe Artie and Charmaine had invited a few relatives to dinner.
Some wanted chicken.
Some wanted sausages.
Wallah!!  An Italian 'perch and pen' dish to the rescue.
Necessity is the Mother of Invention… and recipes.

Hint:
The skillet should be large enough to hold the chicken in a single layer.

In a medium skillet place
1 pound Italian-style pork sausages
Prick them all over with a fork.
Add
Cold water to come half way up the sausages.
Cover the pan, place over medium heat.
Cook until the water has evaporated and the sausages are cooked through.
Uncover and cook until browned.
Cut the sausages into 1-inch pieces.

In a large skillet pour
1/4 Cup olive oil
Heat over medium heat.
In the heated oil place in a single layer
The dried chicken pieces
Sprinkle with
salt and pepper
Cook, stirring occasionally, until golden, about 10 minutes.

Tip the pan and spoon off most of the fat.
Add
the cooked sausage pieces
1/4 Cup chicken broth
1 Cup pickled sweet peppers, cut into bite-sized pieces
1/4 Cup white wine vinegar (or the peppers' pickling liquid)
Cook over high heat, stirring often, about 10 to 15 minutes.
The liquid will be reduced to a glaze.
Serve immediately.

Would I make Chicken Scarpariello again?
Yes, but I would use white wine instead of the vinegar or the pickling liquid.
With relatives visiting, who needs more agita?

One recipe down.  Eighteen more to go.